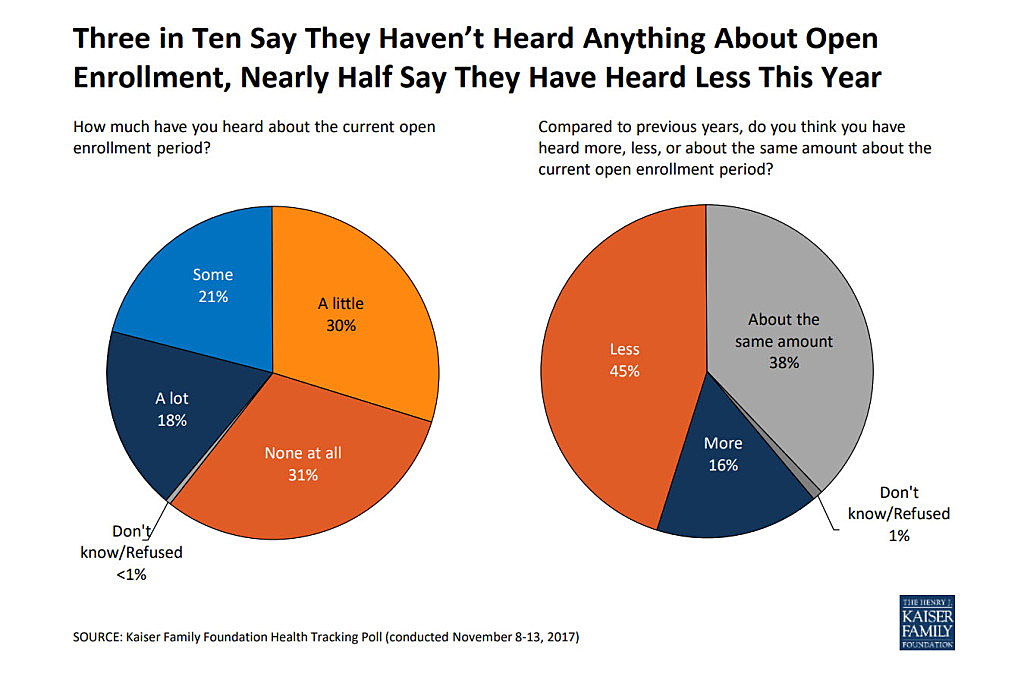 While the Affordable Care Act’s fifth open enrollment season is off to a surprisingly good start, many uninsured people said they weren’t even aware of it, according to a survey released Friday.

Nearly a third of people overall — including a third of people without health insurance — said they had not heard anything about the sign-up period for individuals who buy health plans on their own, according to the survey by the Kaiser Family Foundation (KFF). (Kaiser Health News is an editorially independent program of the foundation.)

Open enrollment started Nov. 1 and runs through Dec. 15 in most states. Advocates fear enrollment will decline this year because President Donald Trump has been repeatedly saying the health law is “dead,” and his administration severely cut funding for publicity and in-person assistance.

One factor that could be pushing more people to sign up earlier this year is the open enrollment season was cut in half from three months to 45 days for the states relying on the federal exchange. Some state exchanges allow enrollment into January.

In the previous open-enrollment season, 12.2 million people nationwide selected individual market plans through the marketplaces. The number dropped off during the year because not everyone paid and some found coverage elsewhere.

Forty-five percent of all respondents to the KFF survey and 52 percent who said they were uninsured said they have heard less about open enrollment this year compared to previous years.

Insurers are trying to pick up some of the challenges of publicizing enrollment, and some of those ads are getting noticed.

The poll found that nearly 8 in 10 Americans were aware the Affordable Care Act was still in effect.