(KPAX) An industry that’s been in Montana for over a century doesn’t seem to be slowing down.

This year, Montana Rail Link is announcing a massive capital spending plan which will be the largest in its history. The plan will invest $95 million in 2019 for new technology upgrades and safety modifications.

Lane said MRL is set to install Positive Train Control, which can overpower a train remotely and even stop it automatically before a crash occurs.

“It’s remote control GPS radio towers all across our network, which is another layer of safety, that can bring a train to a stop if a train crew is incapacitated,” said Lane.

In addition, it is a way to remotely direct the movement of trains.

“Centralized Train Control, which allows a dispatcher in Missoula to see what’s happening in Billings on a computer screen and be able to just click with a mouse to align switches,” said Lane.

But as those with Montana Rail Link look forward to the future, Lane said it would be nothing without looking back on its history.

Much of Montana’s identity is derived from the start of the railroad-building boom of the American 19th century.

Most towns in Montana were formed roughly 60 to 120 miles apart, said Ross. That’s because back then, trains were run off steam and they needed to stop and fill up before embarking on the next route.

“The national parks, including Yellowstone and Glacier, were formed largely in part due to the railroads,” said Lane. “Montana in large part finds its history and shared history in the railroad business.”

Flash forward to the 1980s when now Montana billionaire, Dennis Washington discovered his success in once-leased land from the Burlington Northern Santa Fe. He founded Montana Rail Link and grew it into a thriving business which employs 1,300 people and operates a $100 million payroll.

Technology in the railroad business has evolved over the years.

On the grounds of the largest ladder yard in Montana, General Foreman Mark Turner shows how. He uses a remote to move big locomotives with the ease of his thumb.

He turns train engines on a switcher while standing adjacent to them on the ground. It’s a system that’s helpful in building trains and changing their directions.

“You stand at the end and you have a little remote,” he said. “You can run that locomotive from a long way away.

Rolling into Laurel are 24 trains a day. Twelve travel east and another 12 head west. The Laurel rail yard is the largest between Seattle and Minneapolis, making it a regional hub. Fifteen-hundred cars come through the rail yard a day and each day crews build eight trains.

Running a train on a track is cost effective and efficient. In comparison to the trucking industry, a train can haul one ton of freight 500 miles on a single gallon of diesel fuel.

“If we can compete with our friends in the trucking company we’re taking trucks off of public infrastructure and on to private infrastructure paid for by Montana Rail Link,” said Lane. 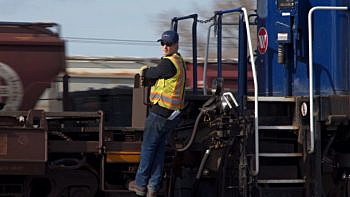 To get the Laurel rail yard to work efficiently takes a lot of personnel. Three-hundred people work in Laurel, many of them in a control tower that stands tall above the tracks.

While the yard works like a grid, inside the control tower, there’s a sophisticated network on display. Trainmasters and mechanical foreman are working together as a team to build the train and depart the trains through the terminal.

Athey oversees it and refers to it as almost a game of chess.

“You’re trying to look for efficiencies and opportunities to expedite traffic and so it’s a big game of chess,” said Athey. “There are five separate main lines that are meeting right here in Laurel.”

Athey is hoping that Montana Rail Link can increase its efficiency to build and move 30 trains a day, up from the 24 they do currently.

Lane also said in just the last five years MRL has invested over $250 million into their network with new signals, new track and hundreds of thousands of new railroad ties.

“We are looking toward the future and it’s anything but that technology from the 1880s,” Lane said. “It’s an evolving business and people think that trains are kind of stuck in that technology.”