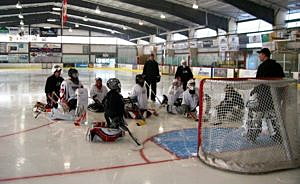 (KPAX) Ice hockey in the summer isn’t normally an option in Missoula, but this year if you need a place to cool down there’s no better spot than a big sheet of ice.

Just make sure to bring a mask besides the one on your helmet.

After being forced to close early rink officials decided to try opening a little earlier this year and people couldn’t be happier.

“It feels great we get to play hockey again with our friends and have fun, it was weird because we were about to do spring hockey and then it got canceled,” said goalies Alex and Kaiden Mountain. “It’s really nice we don’t have to stay home and just do boring stuff.”

“It’s nice to get that cold fresh air in glacier and get on the ice to train some kids so far its been fun,” said Emerson Etem, coach of the Missoula Bruins.

To open the rink up during the pandemic, some things had to change in the old barn.

“Mostly just getting the younger kids used to being in the locker room hanging out talking among each other with their masks on definitely something to get used to,” said Etem.

It might take some getting used to but so far ice rink executive director Laura Henning has been impressed by everyone’s effort to follow the rules.

“It’s actually worked out really nice I wasn’t sure how it would be received but people have been doing it,” said Henning. “Everybody coming into the rink has been wearing masks.”

“The mask mandate came down and within an hour we had a youth hockey tournament and everyone came down wearing masks.”

Mask cleaning procedures were increased around the rink with guidance from the Missoula City-County Health Department and the ice rink association.

“We have to clean every hour or half-hour people are on the ice and it’s just doing it all the time you really just get it down to what to clean,” said Glacier Ice Rink employee Daniel Redfield. “It’s mainly just thinking about what people touch a lot or are around a lot that you need cleaned.”