Boise: How Idaho’s capital is flourishing amid a pandemic

(CN) — Boise has always commanded a somewhat unique reputation among the denizens of the Gem State. Serving as both Idaho’s capital and most populace city, Boise has long provided the closest thing to a big-city experience in an otherwise largely rural state, and yet still seems to carry many of the trappings that come with rural living.

It’s a place where a vibrant downtown packed with fusion restaurants and novelty shops seems only a stone’s throw away from cattle crossings and horse trails. Where ornately graffitied and tourist-trekked alleyways — the most famous of which has been dubbed Freak Alley by locals — are surrounded by foothills and hot springs. And where hippies and oddballs rub elbows with ranchers and cowboys on a regular basis.

It’s also something of an outsider in its own backyard. Like many larger cities in rural areas, Boise has a reputation for being a more liberal, Democratic hub in an otherwise overwhelming conservative state, a large blue dot in a sea of reliably red territory.

But look around Boise long enough and talk with those who have called the city home for decades, and it becomes apparent that Boise is not the same creature it once was. Traffic and backed-up commutes have become more common, commercial construction and residential development projects seem never-ending and city streets have become more crowded by the day.

These changes can all be traced to the simple fact that Boise is — and has been for some time — a city mid-metamorphosis, one that is growing at an almost shocking rate. And for many, grappling with that reality has been a challenge.

For many residents, these changes are chalked up to something locals love to discuss at length: the great migration of Californians and other coastal-state residents to the city.

Brenda Sick, a general manager at the G. Willikers toy shop in downtown Boise, says she encounters customers on a regular basis who hail from out of state, many of whom are reluctant to admit their newcomer status.

“I talk to people in the store all the time who have moved in here from out-of-state and they are almost embarrassed to say that they’re from places like California. But almost all of them will say things like, ‘We don’t like it there and we want something like this, because it fits us,’ and I see that. I see people are moving here because they want to be here. They don’t want to deal with some of the craziness of other places.”

These perceptions seem, at least to a point, to be supported by Boise’s population data shifts. Forbes Magazine listed Boise as the fastest growing city in the country in 2018 and the 2020 Census data echoed that sentiment, also giving Boise the top-spot on the list. And according to the Boise Valley Economic Partnership, nearly half of all migration to the Boise area has been made up of Californians.

This influx of out-of-towners has proven to be an easy target for many Boise locals who think it has grown into a city they no longer recognize, but others say these changes require a lot more context and cannot be so squarely placed at the feet of folks from the coast.

Brandi Burns, the History Programs Manager for Boise’s Department of Arts & History, says one of the first thing to remember regarding Boise’s new surge of residents is that if you trace the city’s history back far enough, most of us inevitably had to come from somewhere else.

“Put yourself in their shoes. If you didn’t have some of these opportunities, this is a nice place to be. Remember that everyone who lives here now, even if they’ve been a lifelong resident, somebody moved to get them here. The only ones who have always been here are the Indigenous people. Everybody else is a transplant.” 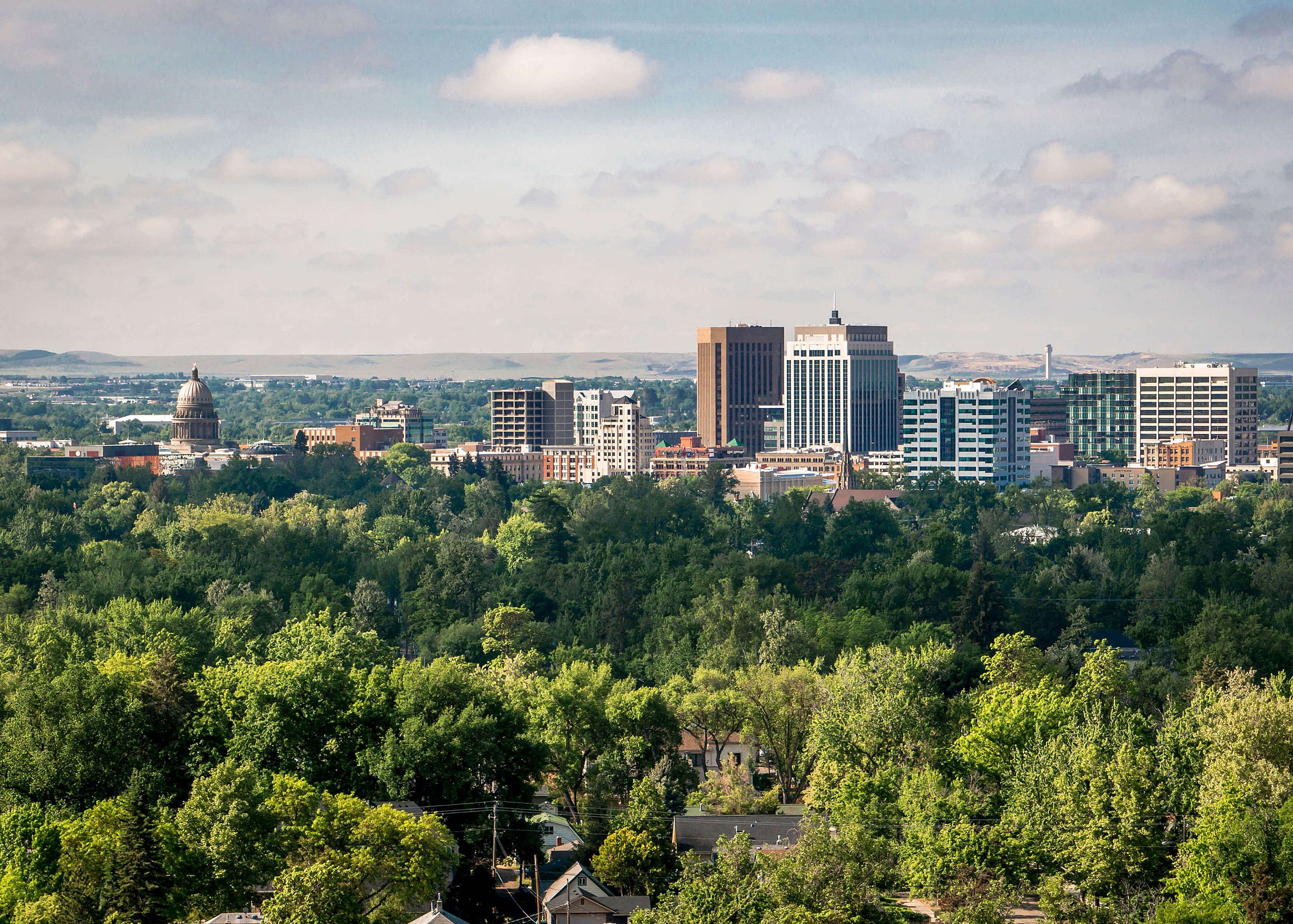 As for Jennifer Stevens, who herself first came to the Boise area in the early 80s and is President of Stevens Historical Research Associates and professor of the Practice in the History and Urban Studies Departments at Boise State University, she says people need to keep in mind that Boise’s growth is by no means a new occurrence.

“The city is in constant flux, and we are constantly growing. There’s really only been one period of time where we didn’t grow, and that was in WWII when our population went to the job sectors in the Pacific Northwest, specifically. But other than that, we’ve been growing ever since we were founded. We’re different now than we were in 1982, and we will be different in 10 years than we are today.”

A big part of this growth stems from the fact that during the second-half of the last century, many Boise leaders and developers made a concentrated effort to transform the city and grow it to what it is today. Local leaders pushed to expand and emphasize the Boise River that runs through the city, looking to highlight the natural amenities and environmental opportunities Boise has at its disposal.

Around the same time, tech giants like Hewlett-Packard and Micron — the latter of which was founded in Boise in the late 70s — settled Boise, bringing new jobs, attracting new business ventures and further cementing the city as an area that seemed bent on expanding in entirely new ways.

Stevens says it’s factors like these and so many others that helped to set the stage for much of the changes Boise has experienced throughout the decades — population shifts included.

“There are all these other factors that are driving people to leave the places they are leaving to come here, and would they be coming here if we hadn’t established this reputation of being close to the outdoors, friendly, pretty, good climate. If we hadn’t been building that reputation over the last 50 years, when the last five years had happened, would we still be the ones getting those people or would some other city? I would say there all these factors that are driving people, and by virtue of the fact that we’ve built this reputation and made Boise what it is, we are the ones getting them.”

But despite this historical track record of growth, some still take issue with the consequences of Boise becoming a larger player in the metropolitan world and point to one major shift in Boise as their key problem: a recent explosion of housing prices.

A recent study by Florida Atlantic University cited Boise as the most overpriced housing market in the nation, and the Zillow Home Value Index reports a 45% increase in Boise home values since just last summer. This has caused some in the city to fear that they are being priced out of a housing market that seemed far friendlier to them just a few short years ago and stories of younger, well-earning adults being unable to afford Boise property — be it to buy or even rent — have become all too common.

But Leigh Wilson, owner and founder of Boise’s Best Real Estate company that’s been in operation since 2005, says increases like these are sometimes part of the natural progression of a city on the rise, and that with growth comes the inevitability of some change.

“If you look at your bigger cities, which we are now considered one of them, people don’t typically buy houses in their 20s. That’s just kind of the nature of the beast when it comes to the natural growth of becoming a mid-sized to larger sized city. We’re used to being the small town where you can buy a house after you graduate from high school or college, and that’s just not the case anymore and hasn’t ever been the case with larger cities.

It’s not going to go backwards. We all know that change is imminent, whether you want to grasp that change and look at the positive or not grasp that and only look at what was.”

As for those who want to put the blame of the rising housing prices entirely on the shoulders of Boise’s migration explosion and out of state homebuyers entering the market, Wilson also advises caution in rushing to judgment here. While new buyers from other areas certainly play a role, the fact that the city is currently in the middle of a housing shortage that has deeply rocked Boise’s supply and demand curve also needs to be considered.

“People want to blame them from coming in and paying cash for houses, and I don’t think that’s fair. The fact that they’re moving in here puts a higher demand on the number of houses we need, undoubtedly. . . We have a 40% housing shortage here in Idaho, and that’s what’s causing our prices to drive up. It’s simple supply and demand. It’s not rocket science.”

However, Boise’s growth points to much more than just uncomfortable growing pains. Boise boasts an unemployment rate of just 3.6%, nearly two whole points below the current national average, a roughly $3 billion tourism industry and even saw a bump in its job market increase over the past year despite the ongoing Covid-19 pandemic.

These trends help to showcase a city that may be changing before the eyes of its residents in some stark ways, but one that appears to be changing in a way that lends itself to the economic improvement a growing metropolitan area needs to stay healthy and thriving.

Chad Dryden, who’s worked as the marketing director for the Boise Record Exchange for 12 years and recently became a co-owner after the previous owners — who ran the downtown record shop since 1977 — retired, says he has seen firsthand what happens to a city when it no longer has the ability or desire to grow. With that understanding, he says Boise’s expansion is a much easier pill to swallow than the alternative.

“What I think people in Boise should appreciate is the fact that they are a part of a growing city, and not many people get to experience that. Myself being from the Cleaveland area and growing up in the Rust Belt, I saw cities in decline. And I can tell you that a city in decline is a lot worse to observe than a city that is on an upward trajectory.”

This isn’t to suggest, of course, that Boise’s future is set in stone.

While for many years Boise has been the darling of many top ten lists of greatest cities to live in the U.S., drastic changes in the housing market and even challenges with Boise’s availability of public transportation — which, like the housing market, has come under some fire for not keeping up with the needs of its growing populace — have been cited as potential hurdles the city needs to overcome.

But for people like Dryden, whatever the future may hold for Boise, one thing is clear: the only surefire way to understand the complex cultures, people and realities of life that fuel the city’s lifeblood is to simply experience it for yourself.

“I think that Boise is unique. You really can’t understand Boise until you’ve come to see it and get that perspective. A lot of the beauty here in the city is that uniqueness and the culture that has developed here and continues to develop here. I think it’s a matter of people coming to see it for themselves rather than let someone else tell them what Boise is about.”