By Alister Doyle OSLO (Reuters) - Backers of a global accord to fight climate change that formally comes into force on Friday say they are confident the deal can survive any legal challenges by U.S. Republican candidate Donald Trump if he wins next week's presidential election. Trump has threatened to reject the accord negotiated by nearly 200 governments, including that of … END_OF_DOCUMENT_TOKEN_TO_BE_REPLACED

By Valerie Volcovici and Devika Krishna Kumar (Reuters) - Forget the accusations of groping, bigotry and email mismanagement. If the American voter had to choose between Republican nominee Donald Trump and his Democratic rival Hillary Clinton based on their energy policies alone, the presidential election would still be a remarkable drama, amounting to the biggest referendum … END_OF_DOCUMENT_TOKEN_TO_BE_REPLACED

By Liz Hampton HOUSTON (Reuters) - Sunoco Logistics, the future operator of the oil pipeline delayed after Native American protests in North Dakota, spills crude more often than any of its competitors with more than 200 leaks since 2010, according to a Reuters analysis of government data. The lands of the Standing Rock Sioux Tribe sit a half mile south of the proposed route … END_OF_DOCUMENT_TOKEN_TO_BE_REPLACED 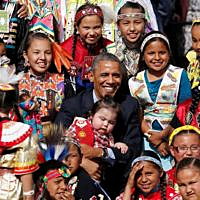 By Valerie Volcovici (Reuters) Former Democratic presidential candidate Bernie Sanders and four other U.S. senators have called on President Barack Obama to order a comprehensive environmental review of a pipeline project that has stirred widespread opposition from Native Americans and environmental activists. After a federal appeals court last week denied a request to halt … END_OF_DOCUMENT_TOKEN_TO_BE_REPLACED