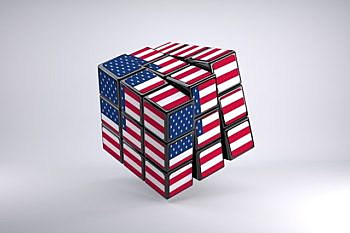 The 2018 midterm cycle is still in its early stages during a highly polarized period in American politics, but shifts in demographics regarding partisan affiliations were decades in the making for women, minorities and educated voters, the Pew Research Center reported Tuesday.

In a survey of tens of thousands of registered voters from 1994 to 2017, Pew researchers found that gender and education played a significant role in partisan affiliations, especially since the last midterm elections in 2014.

The Democratic Party in particular has seen strong gains. Women made up 48 percent of Democratic voters in 1994, compared to 56 percent in 2017. Forty-eight percent of men said last year they are Democrats or lean Democrat, the same as in 2014.

Men were more likely to have dismissed both parties, as both Republican and Democratic men fell in number to 28 and 26 percent, respectively, while men identifying as Independent rose from 34 to 42 percent from 1994 to 2017.

However, voters lacking a college degree have shown little statistical change within the Democratic Party. While the party saw a small uptick in voters without a college education in 2008, it only saw a 1 percent increase since 1994, from 45 to 46 percent. 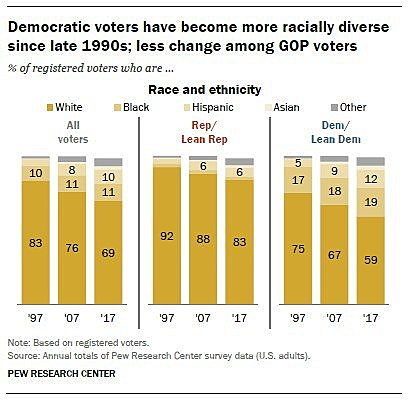 However, when voters were asked to choose a party, Democrats gained an 8-point edge at 50 percent in 2017, compared to 42 percent for Republicans.

Race and ethnicity have also played a role in shifting partisan demographics.

While white voters still had a significant majority in both parties and the aggregate of all voters, their majority has been in steady decline since the 1990s. In 1997, white voters made up 83 percent of the overall electorate, whereas 69 percent of voters were white in 2017.

Tangential to outright party affiliations, ideological monikers also shifted in the last two decades – particularly for liberals. Overall, voters who call themselves liberal rose from 17 percent in 2000 to 26 percent in 2017, while self-described conservatives remained flat at 38 percent during the same time period.

Conservatives rose 10 points among Republicans from 58 to 68 percent, but fell 8 percentage points to 15 percent amongst Democrats. Since 2000, Democrats began owning the liberal moniker, which spiked the highest in any demographic within this survey question from 28 percent to 46 percent.

Broadly, educated voters, minority voters and women were a boon for the Democratic Party, while white voters lacking a college degree were more likely to support the Republican Party. While that has been the trend for decades, the changes in demographics have become more acute since the 2014 midterms.

Based on voter affiliations, the data suggests that the Democratic Party could be poised to win back state and congressional seats in 2018. Minorities, who have more consistently aligned with Democrats, make up a greater portion of affiliated voters while white voters, historically aligned with Republicans, are losing statistical ground.