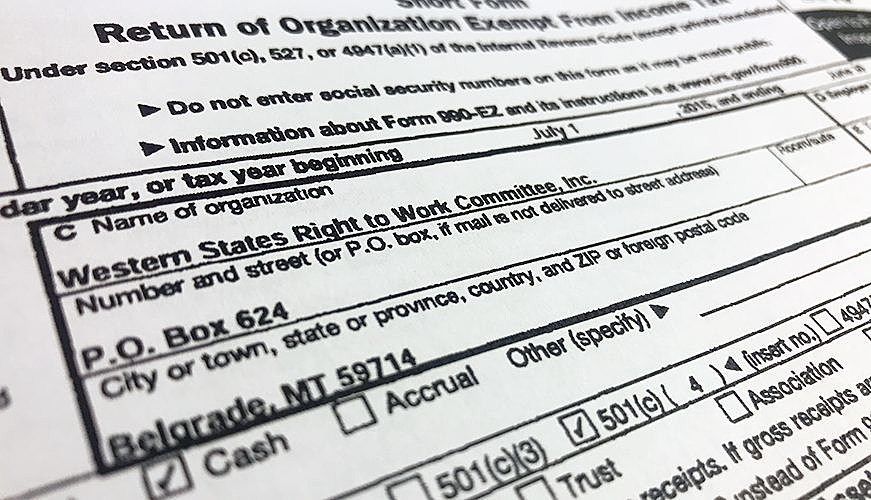 HELENA — A group at the center of one of the biggest elections scandals in modern Montana history is actively engaged in the 2018 election, while hiding its activities and spending, according to a complaint filed with state elections regulators.

Kalispell Republican Rep. Frank Garner said in a complaint filed March 6 with the Montana Commissioner of Political Practices that a field operative for Montana Citizens for Right to Work is actively recruiting candidates to run against him in House District 7. Garner said that activity is illegal because the group has not registered with state elections officials as required by law.

“It appears as if these groups are back and are trying to corrupt our election system once again,” Garner wrote in his complaint.

The complaint stems from a meeting that Montana Citizens for Right to Work assistant director Al Chan allegedly held on Feb. 28 in Kalispell with members of the Flathead County Libertarian Party. According to Kalispell resident Dan Nelson, who said he was at the meeting, the purpose of the confab was for Chan to recruit candidates to run against Garner in the June 5 Republican primary. Nelson later provided Garner with a detailed written account of the meeting, which Garner attached to the complaint.

“Al [Chan] said he did not like Garner and talked about him being a liberal and listed off several bills Garner either supported or was against in what seemed to be a negative fashion,” Nelson stated in his account. “Only one of the bills and issue [sic] he talked about as it was related to Garner was related to the Right to Work issue. Al said he also had a personal beef with Frank Garner and implied he had met him before and didn’t like him. Al did not specify what his issue was or why.”

Garner said in an interview that Chan contacted him in February and tried to set up a meeting. Garner said he refused to meet with Chan because of Right to Work’s shady history with Montana elections.

Chan did not return multiple requests for comment via phone and email.

Calls and emails to Randy Pope, executive director of the Belgrade-based Montana Citizens for Right to Work, also went unanswered.

Montana Citizens for Right to Work, along with its national affiliate, the National Right to Work Committee, was at the center of wide-ranging political corruption scandal in Montana covering the 2008 to 2012 election cycles. Tens of thousands of pages of documents obtained by the state Commissioner of Political Practices revealed how the national anti-union group oversaw the activities of American Tradition Partnership, the group at the center of allegations of illegal third-party influence in Montana Republican primary campaigns in 2008, 2010 and 2012.

Five Republican plaintiffs eventually settled with Motl, and two others had default judgments entered against them. The settlements and judgments included financial penalties and signed admissions by some of the candidates that they violated state elections laws by illegally coordinating with third-party political groups.

Bozeman Republican Rep. Art Wittich, who was among those who faced illegal coordination allegations, refused to settle his case and instead sought a jury trial. After a protracted legal battle, Wittich went through a four-day trial in the spring of 2016 that featured testimony from former Right to Work staffers who helped run the network of private and non-profit companies involved in the massive campaign scheme.

At the trial’s conclusion, a jury found that Wittich broke Montana law by illegally coordinating with Right to Work-connected groups during his 2010 Senate primary campaign. A judge ordered Wittich to pay $68,232.58 in fines. In a 5-0 decision in August 2017, the Montana Supreme Court affirmed the jury’s verdict.

One final candidate, Terry Bannan, of Belgrade, is still facing allegations of illegal campaign coordination stemming from the 2010 Right to Work scandal. Wittich is representing Bannan in those legal proceedings.

The Commissioner of Political Practices is currently suing Montana Citizens for Right to Work and its affiliated organizations for their alleged illegal activities in the 2010 and 2012 elections cycles. That case has not yet been scheduled for trial.

Documents obtained by the Montana Free Press indicate that Montana Citizens for Right to Work has been actively participating in Montana elections since as far back as 2008. However, state records show the organization has not registered with the Commissioner of Political Practices, nor has it reported any political activities or election-related spending since at least 2012.

Under Montana campaign finance laws, political committees must file a statement of organization “within five days after appointing a campaign treasurer or making an expenditure to support or oppose a candidate or ballot issue, whichever occurs first.”

The extent of Montana Citizens for Right to Work’s political activities during the six years is unclear, but evidence obtained by the Montana Free Press suggests the group was spending money on election-related activity in the state.

On his LinkedIn page — which as of March 6 had been removed from the popular professional networking website — Al Chan listed his job as “Assistan [sic] Executive Director at Montana Citizens For Right To Work,” a Bozeman-based position he stated he has held since January.

Chan’s LinkedIn profile also stated he worked for the National Right to Work Committee out of Bozeman from August 2014 through December 2014. Chan lists his work experience during that time as “strategic campaign consulting, executing campaign strategies, and secur[ing] pledges from state House/Senate candidates via survey program.”

Chan worked for the National Right to Work Committee in Washington state from April 2016 to January 2018, according to his online resume, which was also recently removed.

Chan also listed a three-and-a-half-month stint as a “Right to Work Committee” field staffer based in Manhattan, Montana during the 2014 election season.

According to his resume, as a Montana field staffer in 2014, Chan:

♦ “Met with candidates for state house and senate for the purposes of candidate recruitment and candidate vetting.”

Chan also listed having worked as a Livingston-based Right to Work field staffer from Sept. 2 to Nov. 15, 2012, during which time he “facilitated mass communications with pro-Right-to-Work voters in targeted state house/senate districts via direct mail.”

Right to Work was not registered as a political committee, and none of these activities were reported to the state, according to Commissioner of Political Practices records.

Sarah Arnold, a former Right to Work staffer who provided in-depth testimony about the inner workings of the Right to Work campaign machine during the Wittich trial, said in an interview Friday that it is inconceivable that Chan could have executed the tasks he claims to have done in Montana in 2012 and 2014 without spending money.

Arnold said when she worked for Right to Work, direct mail survey campaigns alone cost upward of 60 cents per mail piece. That cost did not include time and labor expenses, Arnold said.

“You can’t do direct mail without spending money,” Arnold said. “At minimum you have to pay for postage and printing.”

Federal tax records indicate that salaries were paid to Montana Citizens for Right to Work employees by a group called Conservative Action League, which lists its address as a post office box in Springfield, Virginia.

According to IRS 990 records, Conservative Action League received $820,000 from the National Right to Work Committee between 2014 and 2016. IRS 990 records for 2017 were not immediately available.

It’s unclear how much money the Conservative Action League spent in Montana in salaries or other grants. According to records from 2014 and 2015, the group paid at least $154,182 to “Western States Right to Work,” which is the group that includes Montana Citizens for Right to Work.

Arnold said when she worked in Montana for the Right to Work-affiliated groups she was paid directly by the National Right to Work Committee.

“I’m not sure why they would put it through another group unless the other group is trying to hide something,” Arnold said.

Garner was not aware of the group’s source of funding until contacted by the Montana Free Press.

“People have to decide if they want to be represented by citizen legislators — people they see in the street or in their grocery store every day — or if they want to be represented by dark money groups funded out of a P.O. Box in Virginia,” Garner said. “That’s why I felt I had to bring this information to the commissioner. This isn’t my first run-in with dark money groups, but this is my first complaint. Enough is enough.”

Garner has been in the crosshairs of dark money political groups since 2015, his freshman year in the House.

In February of that year, in the midst of the legislative session, the Koch Brothers-funded Americans for Prosperity held a “town hall” meeting in Garner’s district and didn’t invite the lawmaker to attend. According to the Flathead Beacon, a crowd of about 100 people attended the event at the Red Lion Inn in Kalispell.Some of them received word about the gathering through the postcard mailers, which read, “Tell Frank Garner to stand with us and vote no on ObamaCare’s expansion in Montana.”

Garner came under attack from AFP again over the weekend when the group went door-to-door handing out postcards criticizing Garner for his support of a 2017 bill to increase the gas tax. That measure passed the Republican-controlled House 57-43.

Garner is expected to face an aggressive third-party campaign between now and the June 5 primary election.

“It would be nice if we were on a level playing field,” Garner said of the outside spending by third-party groups.

Garner said that as a part-time citizen legislator, he’s required to report who supports his campaign, including their name, occupation and address. The same is not true for dark money groups who are not required to report the names of their donors or, in some cases, their expenditures.

“In this case, you have groups whose avocation it is to promote their mission, with unlimited amounts of money, who don’t have to tell us who their donors are, and in many cases what their expenses are, as long as they are engaged in so-called issue advocacy,” Garner said. “If we allow dark money groups to spend unlimited amounts of money against people in an elected office, with no controls, no regulations, and aren’t required to follow the rules, then we might as well give them our seats and let them vote for us.”

John Adams is the founding editor of The Montana Free Press, where this story was first published. The story on the Free Press site includes numerous links to documents connected to the case.