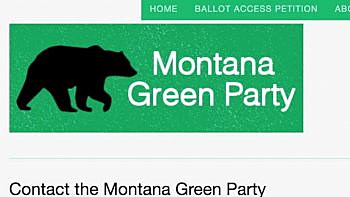 (KPAX) The Montana Republican Party helped finance the effort to qualify the Green Party for the state’s 2020 elections, paying $100,000 to groups that hired or financed mostly out-of-state signature-gathers, MTN News has learned.

The party confirmed Tuesday that it was behind the effort, but had reported late last month, on documents filed with the Federal Election Commission, that it made an initial $50,000 payment in January to the Texas company that hired signature-gatherers.

Montana Republican Party Executive Director Spenser Merwin told MTN News in a statement that the GOP wanted to “provide more choice for Montanans this November,” and noted that state Democrats have worked to “limit ballot access” to minor political parties.

The Montana Democratic Party on Tuesday called the effort “election fraud” and said Republicans engineered the effort to drain votes from Democrats this November and thus make it easier for their statewide candidates to win.

Two years ago, the Montana Democratic Party successfully sued to remove the Green Party from the 2018 ballot, after it had been qualified with the help of out-of-state signature-gatherers.

In that race, the Libertarian candidate won 6.5 percent of the vote and Tester won the election over Republican Denny Rehberg, 48.5 percent to 45 percent.

In Montana, to qualify for the 2020 ballot and have candidates, a “minor party” had to file petitions with the signatures of at least 5,000 registered voters before the March 9 deadline for candidate filing.

On March 6, the Friday before the candidate-filing deadline, Secretary of State Corey Stapleton determined that enough signatures had been verified to qualify the Green Party for the ballot. Within hours, Green Party candidates began filing, to run in several statewide offices, including Montana’s high-profile U.S. Senate race.

Yet the Montana Green Party, through its Facebook page, said it had nothing to do with the petition drive and called it a “Republican and conservative effort” to create “false” Green Party candidates, apparently to draw votes away from Democrats.

According to records filed with county election offices, the petition circulators included Chuck Denowh, a Helena political and public-affairs consultant who works with Republican candidates and other clients.

Last week, the Montana Democratic Party filed a complaint with the commissioner against the Texas firm, Advanced Micro Targeting, claiming the firm had violated state law by not filing reports outlining its spending on the Green Party qualification effort.

Commissioner of Political Practices Jeff Mangan told MTN News Tuesday that his office is evaluating that complaint, in light of new information it received this week on financing of the signature-gathering.

Denowh said Montanans for Conservation filed initially had been listed as an independent committee because Mangan’s office hadn’t yet updated its filing procedures to reflect a 2019 state law that created the “minor party qualification committee.”

Montanans for Conservation’s first report of its 2020 spending and donors isn’t due at the Office of Political Practices until April 15.

Records filed with county election offices show that about 20 of people worked in Bozeman, Missoula, Helena, Butte and Billings to gather signatures to qualify the Green Party for the ballot.

A few listed Montana addresses, but most were from out of state, including people from Texas, California, Florida, New Jersey, Maryland, Arkansas, Pennsylvania, Wisconsin, North Dakota and Alaska.