Everyone is starting to weary of social distancing, but it’s unlikely to end soon unless the U.S. can get an effective testing strategy in place. Without it, we’ll be right back where we were a month ago, according to U.S. scientists.

On Friday, Montanans were becoming hopeful that Gov. Steve Bullock’s shelter-in-place order was doing the trick to slow the spread of COVID-19. Four weeks after Montana had its first four positive cases, it was doing better than other states at keeping the numbers down, even though 365 people were known to have the disease and six had died.

On the Montana Department of Public Health and Human Safety website, a chart of the number of COVID-19 cases by date of illness onset – which is better at showing the progress of the disease rather than a chart of new-cases-per-day – showed a peak of 27 cases on March 22 and then a fairly steady decrease through April 6.

That means, although people are still turning up with the disease, fewer appear to have caught the disease in the past week. And that’s probably because people are maintaining a safe distance and washing their hands.

Right now, the University of Washington IHME model targets April 20 as the date that Montana will have the peak number of COVID-positive patients who need to be hospitalized. The good news is that the expected 113 patients don’t exceed the number of ICU beds available. But the state doesn’t have enough ventilators.

So we should be out of the woods and can go back to normal by mid-May, right?

Don’t bet on it, said Dr. Jennifer Nuzzo of the John Hopkins Center for Health Security.

She said computer models make a number of assumptions, including that the beds are nearby. But that’s not the case for people living in rural counties, such as Mineral County. They also assume that everyone stays at home over the long-term, about 18 months. But that only slows disease transmission, Nuzzo said.

“Were we to dial back social distancing, we should anticipate there would be a rise in cases,” Nuzzo said. “So if we want to change what we’re doing now, we have to have a plan to deal with those rise in cases. Otherwise we’ll potentially find ourselves back where we started.”

Nuzzo also said that leaders like Bullock shouldn’t base decisions on just one computer model such as the IHME. Models are only as good as the data that are put into them, and different models predict a range of outcomes.

The IHME model is a little optimistic, providing lower estimates of cases and shorter time durations. It predicts about 61,000 people will die in the U.S. while a model out of Imperial College in Great Britain predicts 2 million will die.

“Beware of projections and (daily) case numbers – they don’t tell the whole story. These are high consequence decisions that have to be made, so using gross estimates is a risky endeavor. Use data from multiple sources,” Nuzzo said.

Part of the problem is scientists are still learning about COVID-19 and how it’s transmitted. 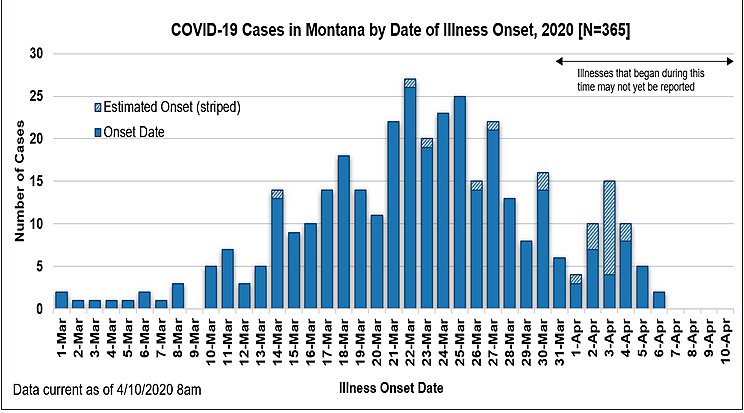 Dr. Vineet Menachery of the University of Texas Department of Microbiology and Immunology said what makes COVID-19 so contagious is that it replicates in the upper airway and nasal passages like a cold. That causes it to spread easier through the air, but also people can be infected before people show symptoms and the virus works deeper into the lungs.

Scientists have hypothesized that unlike a cold, which spreads mostly through coughs and sneezes, COVID-19 may spread more via regular breathing.

“The big thing we don’t know is how infectious people are and when you become infectious,” Menachery said. “The expectation is the vast majority of spread is happening person-to-person and it may be through a person who’s not sick yet.”

That’s why it’s important to have more testing, Nuzzo said.

“I don’t think society can (maintain social distancing) for 18 months,” Nuzzo said. “We need to have better surveillance both for the disease and also for the impact on the health system.”

Nuzzo pointed to Singapore and N. Korea as countries that stayed ahead of the disease by using aggressive case-based tracking, not social distancing. Singapore identified infected people and then they traced all the contacts of those people to put them in quarantine.

South Korea went further and did intensive testing and used cellphone locations to track where people had been. They kept the number of COVID-19 cases low so they didn’t have to do lockdowns, Nuzzo said.

The U.S. needs such a strategy that spans the states and eliminates bottlenecks that are limiting testing supplies and protective equipment and doesn’t require states to compete for equipment. The states also need to be more coordinated and uniform on testing methods and preventive measures, Nuzzo said.

“Case-based measures are going to be essential for the U.S. in its next phase. If we release out social distancing measures, we will have to have a plan to deal with the rise in cases otherwise it will just escalate again,” Nuzzo said. “One of the hindrances is expanding our testing capacity. Testing is severely limited and having limits to testing really limits planning and response for dealing with the next phase.”

People who are vulnerable, such as those with respiratory problems or the elderly in long-term care facilities will need to be protected until a vaccine can be developed, Nuzzo said. And that will likely take a year.

Menachery agreed, saying that COVID-19 is probably not the last new virus the world will see as the human population continues to expand into formerly wild areas. So the work that we do to better equip the U.S. to deal with COVID-19 can end up saving us from a similar struggle in the future.

“This one seems to have a truly awful blend of being highly transmissible and highly virulent,” Menachery said. “It may not be a coronavirus next time, but preparation in the public health and the scientific arenas is going to be really important going forward.”