WASHINGTON (CN) — One person has been shot at the U.S. Capitol on Wednesday after supporters of President Donald Trump stormed the building during a violent clash with police, forcing a lockdown of the ceremony to confirm Joe Biden’s win in the November election.

As reports emerged that a woman had been shot in the chest inside of the Capitol, Trump tweeted: “I am asking for everyone at the U.S. Capitol to remain peaceful. No violence! Remember, WE are the Party of Law & Order – respect the Law and our great men and women in Blue. Thank you!”

Members of the press pool are reporting an armed standoff in the House gallery, saying guns are drawn and someone is attempting to get inside. Press are being asked not to disclose a secondary location they have been moved to.

Swat teams have been deployed to quash the tumult, which broke out amid a tense ceremony in the House and Senate where lawmakers allied with the president lodged their objections to Biden’s victory.

Members of Congress could be heard shouting to Capitol Police to lock doors leading lawmakers away from the House floor.

Shortly after Speaker of the House Nancy Pelosi was confirmed safe, a photo surfaced from within the Senate chamber of a Trump supporter sitting in the chair of the Senate president. The president pro tempore of the Senate is Iowa Republican Chuck Grassley. Later still, one unmasked man was photographed with his feet on the California Democrat’s desk.

Explosive devices were found at the offices of both the Republican and Democratic National Committees, following building evacuations. 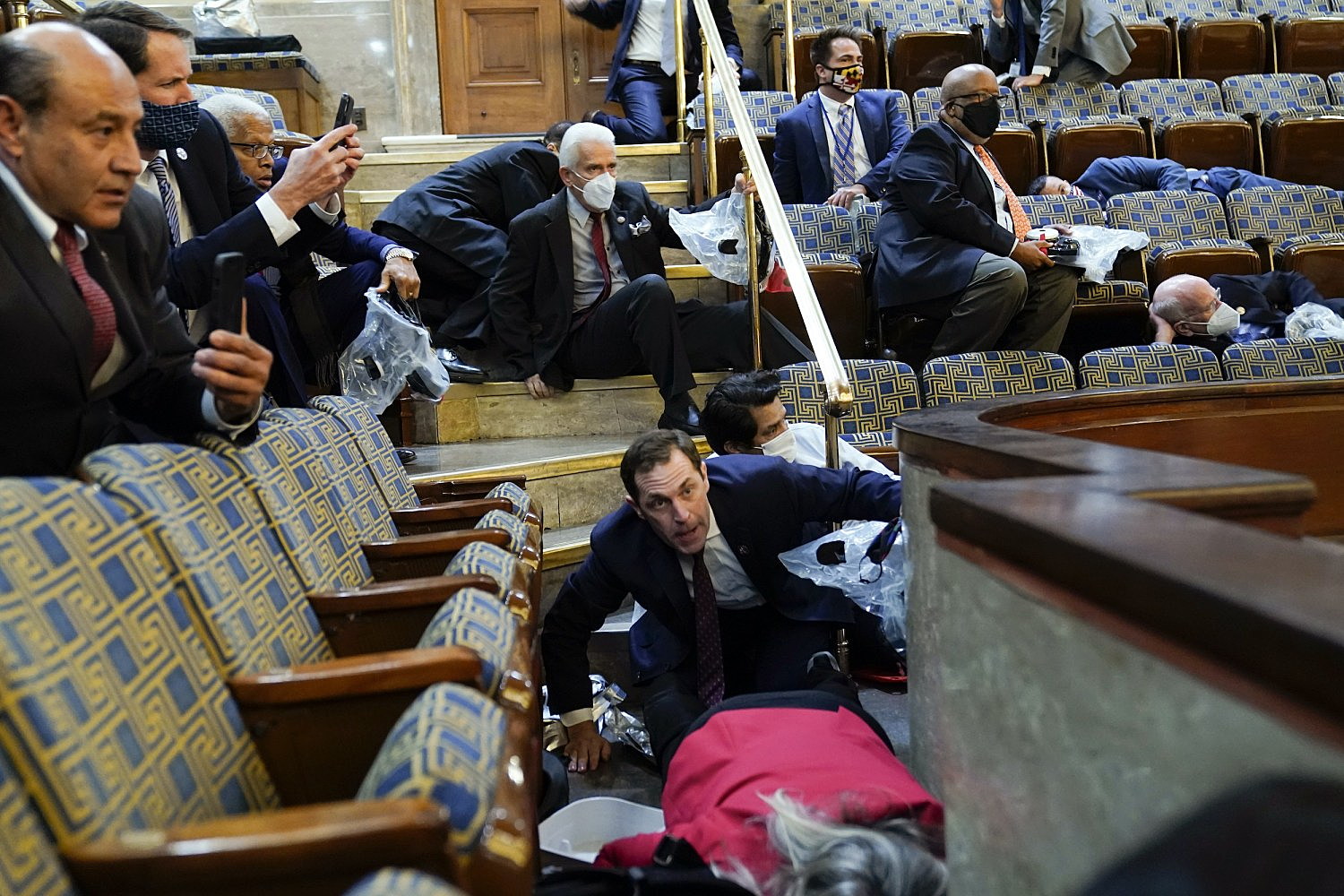 The device found at the RNC office was a pipe bomb, officials have reported. It is yet unclear what type of explosive was found at the DNC. Both buildings are near to the U.S. Capitol where, as Wednesday afternoon turned to night, a CSPAN broadcast captured protesters shouting such chants as “U.S.A.,” “Freedom,” “Get out of here!” and “Fuck ANTIFA!”

U.S. Capitol Police regained control of the Senate side just after 3 p.m., as tear gas was dispersed outside the House chamber doors in the Capitol Rotunda. Statuary Hall, a section of the Capitol that bridges the House and Senate, was slowly cleared out after an intense half hour.

Both Pelosi and Virginia Governor Ralph Northam have requested that the National Guard be sent to secure the building and remove the protesters. President Trump has also called for the National Guard, according to White House pool reports.

Representative Al Green, who was one of the first to call for Trump’s impeachment, called on Trump to “stop this madness that YOU incited,” in a statement on Twitter. (Emphasis in original.)

“The Constitution intended a peaceful transfer of power. This is seditious. Only a dictator or would-be dictator would encourage this. Which are you?” Green said.

GOP House Leader Kevin McCarthy appears to be safe, tweeting his gratitude to Capitol Police who scrambled to shut down the president’s supporters.

“Protesters have a Constitutionally-protected right to be heard, but I urge them to remain peaceful,” the California Republican wrote.

Mayor Muriel Bowser instituted a curfew in the district, urging residents to return to their homes by 6 p.m.

A feed typically broadcasting floor activities in both the House and Senate was also cut. As damages unfolds, it is unclear if lawmakers will return to session immediately, or whether they resume the proceedings at an alternate location.

Attempting to throw another wrench in the mix, a dozen Republicans who have been mounting objections on Trump’s behalf in Congress invited the Supreme Court on Wednesday to block Biden’s certification by Vice President Joe Biden.

Represented by attorney Sidney Powell and others, Congressman Louie Gohmert said he “faces imminent threat of injury that the Respondent [Pence] will follow the unlawful Electoral Count Act and, in so doing, eviscerate Rep. Gohmert’s constitutional right and duty to vote for President under the Twelfth Amendment.”

“With injuries directly caused by a defendant, plaintiffs can show an injury in fact with ‘little question’ of causation or redressability,” the emergency application states. “Although the Respondent did not cause the underlying election fraud, the respondent nonetheless will directly cause Rep. Gohmert’s injury.”

Protesters breached the building by ramming a portion of a U.S. Capitol door, which shattered glass and gained them entry to where lawmakers were debating.

Representative Hakeem Jeffries, a New York Democrat, said on Twitter as the chaos unfolded: “Violent Trump supporters have stormed the Capitol. We’re on lockdown right now in the Chamber. Blood will be on the hands of those perpetrating the big lie that Trump won.”

Before the Senate called a temporary recess to its debate, objections were just getting underway.

“We’re debating a step that has never been taken in American history: Whether Congress should overrule the voters and overturn a presidential election,” Senate Majority Leader Mitch McConnell, a Kentucky Republican, said from the well of the Senate floor, at times visibly emotional.

As he gave his stamp of approval on the impending peaceful transition of power from Trump to Biden on Jan. 20, McConnell called his vote during Wednesday’s session “the most important vote I’ve ever cast” over his 36 years serving in the Senate.

There was no confirmation that McConnell had been safely sheltered in place. Protesters used what appeared to a small cart to scaffold the Capitol’s facade, adjacent to what appeared to be the Senate majority leader’s office, to bang on the windows of the room.