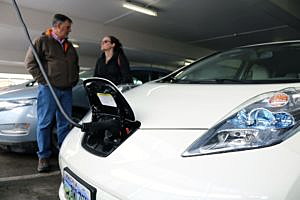 WASHINGTON (CN) — President Joe Biden announced a strategy Thursday to quickly transition America to electric vehicles, noting that the country falls in third when it comes to manufacturing in this rapidly growing sector.

“America is back, we are in the competition for the 21st century,” Biden said in remarks introducing the plan this afternoon. “A future that will be built right here in America.”

The new executive order, which Biden signed after speaking, adopt standards slightly higher than they were under the Obama administration — standards that former President Donald Trump had made a point to roll back.

As the White House sees it, Trump’s policy caused America to fall behind to China and other countries.

“By setting clear targets for electric vehicle sale trajectories, these countries are becoming magnets for private investment into their manufacturing sectors — from parts and materials to final assembly,” the fact sheet on Thursday’s announcement states.

Apart from the business perspective, the standards represent a climate change course correction and move into a zero-emissions future consistent with Paris climate goals — as transportation is the country’s largest source of greenhouse gases.

By the end of the decade, Biden wants half of all new vehicles sold to be battery electric, plug-in hybrid electric or fuel cell electric. The standards will have a public comment period and final approval, but environmental groups are already clamoring to criticize Biden’s proposal as not going far enough.

“Each year, we’re experiencing worsening climate disasters and the inequitable consequences of polluted air, with transportation making up the bulk of emissions driving the crisis,” Sierra Club President Ramon Cruz said in a statement. “President Biden must seize the moment and craft stronger federal clean car standards, one of our most impactful tools for climate action.”

Still, the move is largely supported by major U.S. and foreign automakers, who joined Biden as he signed the executive order.

In a joint statement, Ford, General Motors and Stallantis said that they had a “shared aspiration” with the president, and pledged that 40-50% of the new car sales will be electric by 2030.

“Our recent product, technology, and investment announcements highlight our collective commitment to be leaders in the U.S. transition to electric vehicles,” the companies said.

Notably absent from that huddle is Tesla, which is the leading manufacturer of electric vehicles and headquartered in Palo Alto, California.

Automakers have previously agreed to aggressive emission standards set by California, which the Trump administration ardently opposed — repealing California’s legal authority to set its own standards.

It will also ramp up requirements and set a schedule for standards for future vehicle model years.