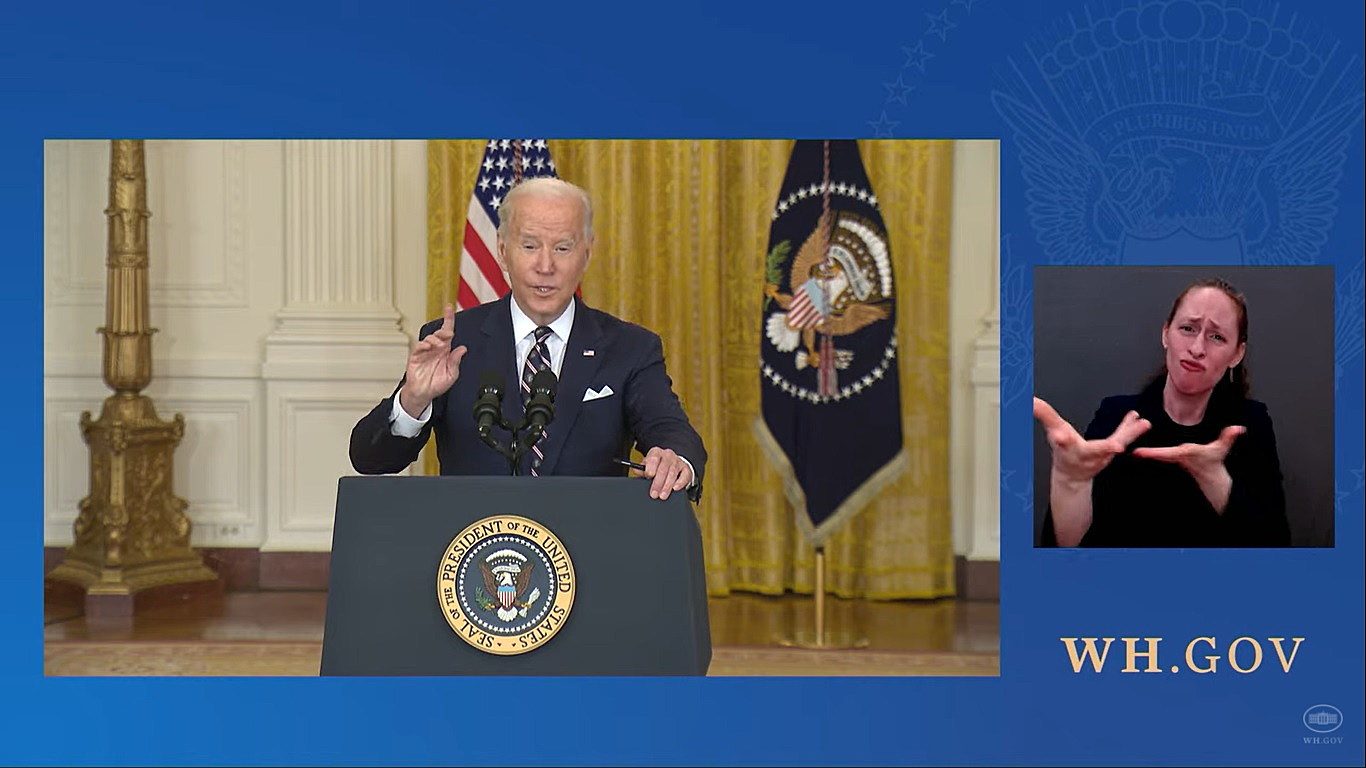 “None of us will be fooled,” Biden said in an address this afternoon, responding to a Monday night speech in which Russian President Vladimir Putin signed a decree recognizing Donetsk and Luhansk, two breakaway regions of Ukraine, as independent states. Claiming that Russian-speaking populations there are subjected to Ukrainian aggression, Putin said Russian troops will be deployed to as “peacekeepers” in the regions.

Putin accused the U.S. and its NATO allies of betraying peace in Europe by taking a domineering stance toward Russia since the end of the Cold War and of breaking promises to Soviet leaders that they would not bring NATO to Russia’s doorstep. “The U.S. and NATO have turned Ukraine into a theater of war,” Putin said. “If Ukraine was to join NATO it would serve as a direct threat to the security of Russia.”

The nationalistic speech drew worldwide condemnation, with Biden piling on Tuesday from Washington

“Who in the lord’s name does Putin think gives him the right to declared new so-called countries on territory that belonged to his neighbors,” Biden asked. “This is flagrant violation of international law and demands a firm response from the international community.

“Starting tomorrow and continuing in the days ahead, we’ll also impose sanctions on Russia’s elites and their family members. They share in the corrupt gains of the Kremlin policies and should share in the pain as well,” Biden said.

Biden also announced that Germany had agreed to suspend the certification process for Nord Stream 2 pipeline that was to bring natural gas from Russia.

The U.S. is sending troops and equipment already stationed in Europe to “strengthen our Baltic allies: Estonia, Latvia and Lithuania,” Biden announced, insisting that the buildup of U.S. military supports in the region is “totally defensive.”

“We have no intention of fighting Russia,” the U.S. president said. “We want to send an unmistakable message, though, that the United States, together with our allies will defend every inch of NATO territory and abide by the commitments we’ve made to NATO.”

With a war all but imminent, the Democrat continued his push for a diplomatic solution that increasingly seems unavailable.

“Nonetheless, there is still time to avert the worst case scenario that will bring untold suffering to millions of people if they move as suggested,” Biden said. “The United States and our allies and partners remain open to diplomacy, if it is serious.

“When all is said and done, we’re going to judge Russia by its actions, not its words,” he continued. “I’m hoping diplomacy is still available”

Russia has for the past eight years been supporting an armed rebellion in eastern Ukraine against pro-Western and anti-Russian governments that have seized control of Ukraine since the U.S.-backed overthrow of a pro-Russian president took place during the so-called “Maidan Revolution” in 2013 and 2014.

Western powers have been bracing for a full-fledged invasion in recent weeks as Russia massed an estimated 150,000 troops on three sides of neighboring Ukraine, promising swift and severe sanctions if their fears materialized.

The United States and its Western allies retaliated Tuesday with clamor to target Moscow with harsh new economic sanctions, bringing a long-festering conflict between Russia and the West to a point of a catastrophic and long-lasting rupture.

The Biden White House initially resisted terming the Monday night troop deployment as an invasion because the administration wanted to see how Russia was actually going to proceed with its escalations toward Ukraine.

In an ominous nod to imminent conflict, the Russian Foreign Ministry announced Tuesday it has decided to evacuate Russian diplomatic personnel from Ukraine in response to threats multiple threats.

President Biden spoke to Ukrainian President Volodymyr Zelensky on Monday and forcefully condemned Putin’s decision, calling his action a breach of international law, an act of war and effectively ending peace talks over the future of the breakaway regions, a ceasefire deal known as the Minsk Agreements.

In defending his actions, Putin argued that the borders of Ukraine were arbitrarily established by Vladimir Lenin’s Bolsheviks after the 1917 October Revolution and by subsequent Soviet leaders.

He charged that the West’s efforts to turn Ukraine away from Russia and join the European Union and NATO has endangered Russia militarily, undermined the balance of power between the two nations, and created a failed state by severing economic ties with Russia, allowing corruption to thrive and supporting a vehemently anti-Russian Ukrainian nationalist movement to take root.