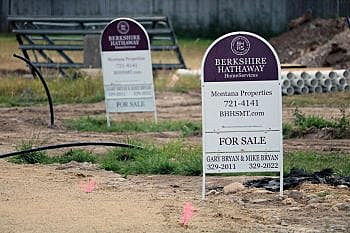 HELENA – A judge in Helena has dismissed a lawsuit that sought to block signature gathering for a proposed constitutional amendment capping residential property taxes.

District Court Judge Chris Abbott ruled Wednesday that the state did follow proper procedure when clearing Constitutional Initiative 121 for signature gathering. Advocates are currently trying to get the measure on the November ballot.

They argued supporters shouldn’t have been able to collect signatures for CI-121 until the Montana Attorney General’s Office ruled on whether it would cause significant harm to businesses and a legislative committee voted on whether to support or oppose it.

Last year, the Montana Legislature approved House Bill 651, which revised rules for ballot initiatives. It required the Attorney General’s Office to review proposed ballot issues for whether they would create “significant material harm” for business interests or create a “regulatory taking.”

It also requires an appropriate legislative interim committee to hold a hearing on a proposed ballot issue and vote to support or not support its placement on the ballot. Information about those decisions would then need to be included on the petition forms people signed.

In the case of CI-121, Attorney General Austin Knudsen declined to review the measure for significant material harm. He argued HB 651’s new requirements only applied to statutory initiatives, not to attempts to amend the constitution. Secretary of State Christi Jacobsen then cleared CI-121 for signature gathering, before any interim committee hearing.

The plaintiffs then filed suit, arguing HB 651 should apply to constitutional initiatives as well. The court granted a temporary restraining order delaying signature gathering, but dissolved it weeks later.

In his decision, Abbott said both sides had reasonable arguments — the plaintiffs because the term “ballot issue” frequently includes constitutional initiatives in other parts of state law, and the defendants because HB 651 specifically changed the petition forms for statutory initiatives, but not for other types of ballot issues.

In the end, however, Abbott sided with the defendants.

“To read subsection (9)(b) to include anything other than statutory initiatives would be to render the statute nonsensical and to violate the dictate that the Court not insert what has been omitted,” he said.

Monforton told MTN News he was pleased with the decision.

“The liberal special interests that sued us knew they were never going to win; they were just trying to disrupt our signature-gathering efforts,” he said. “So this decision comes as no surprise.”

MFPE released a statement from its president, Amanda Curtis, in response to the ruling.

“CI-121 will hurt Montana communities, farmer and ranchers, young families, and seniors,” Curtis said. “That’s why the most politically diverse coalition in Montana history is fighting to keep failed California policies out of Montana’s constitution.”

Abbott also dismissed the plaintiffs’ request that the court find Monforton in contempt for not doing enough to stop signature gathering while the temporary restraining order was in place.

A committee backing CI-121 kept its website up during that time and allowed people to download petition forms, though Monforton noted he put up a post telling people they weren’t allowed to gather signatures.

Abbott said in the decision he was “troubled” by the website remaining up and that the efforts to stop signature gathering were “underwhelming,” but he didn’t believe the court had the authority at this point to find Monforton in contempt.

Monforton told MTN the temporary restraining order did not ask him to close down CI-121’s website, and he complied fully with the order as written.