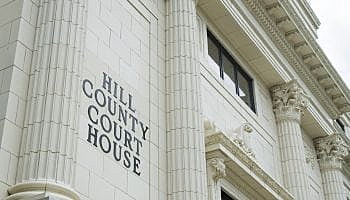 The Hill County Courthouse reopened on Monday, but visitors must comply with physical distancing rules to prevent the spread of COVID-19. County officials still urge citizens to use telephone and digital communications when possible rather than visiting the courthouse.

The courthouse locked its doors, limited its hours of operation, and had few staff working in the building for weeks during Gov. Steve Bullock’s shelter-in-place order.

Plans are to have court proceedings resume in two weeks on a limited basis.

Havre City Hall will remain closed until City Council decides how and when to reopen at its meeting on Monday, May 4.

While the courthouse will be open, people are asked to still use mail, internet, or credit card options to make payments.

More public traffic is expected later in May, Commissioner Diane McLean said, as jury summonses must be returned and trials begin, taxes have to be paid, and June primary election ballots have to be submitted.

While in-person visits to the courthouse are allowed, “we will strongly encourage using other means if possible,” McLean said.

McLean said the county will insist on strict social distancing guidelines for people entering the courthouse. She urged people not to use the courthouse in person if they feel sick or have a fever.

Those guidelines may be amended if the situation changes as the county moves forward, she said.

Hill County has had just one confirmed case of COVID-19 so far. Sixty-seven people have been tested as of Friday.

District Judge Kaydee Snipes Ruiz said in-person appearances in her court will resume Monday, May 11, in compliance with Bullock’s gradual reopening of the state.

People will be asked to wear protective masks and use digital documents instead of hard copies as evidence.

During recesses, courtroom spaces will be sanitized by staff, the judge said.

Criminal trials and jury cases were suspended during the pandemic, and in-person court appearances were allowed only when absolutely essential.