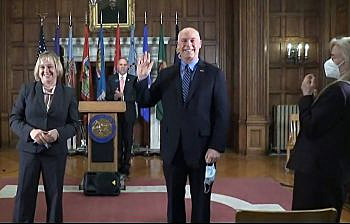 Gov. Greg Gianforte said he will provide a directive Friday that will allow the existing statewide mask mandate to expire.

However, the directive will not bar local jurisdictions from implementing their own mask mandates, he said.

The announcement came as Gianforte signed Senate Bill 65 into law that protects businesses, churches, hospitals and nonprofits from civil liability if someone gets sick — or even dies — from COVID-19 contracted on-site.

The bill was one of two conditions Gianforte outlined on his second day in office required to remove the mask mandate. The other was getting the COVID vaccine to Montana’s most vulnerable populations.

As part of his efforts to expand vaccinations, he updated the state’s vaccination rollout for phase 1B to include all Montanans over the age of 70 and people ages 16-69 with underlying health conditions such as cancer and diabetes and others.

Phase 1B also includes American Indians and other people of color who may be at elevated risk for COVID-19 complications.

As of Wednesday, the state had administered 149,263 doses of the vaccine and 41,539 Montanans were fully immunized, according to the state’s Coronavirus dashboard.

Minority Leaders Sen. Jill Cohenour and Rep. Kim Abbott responded to the governor’s repeal of the statewide mandate in an afternoon statement.

“Despite touting his commitment to vaccinating Montana’s most vulnerable before lifting his mask mandate, Governor Gianforte is now going back on his word and endangering the health and safety of those he has a duty to protect,” Minority Leaders Abbott and Cohenour said. “By passing the buck on public health, Governor Gianforte is putting Montana businesses and workers in an impossible position and undercutting our economic recovery.”