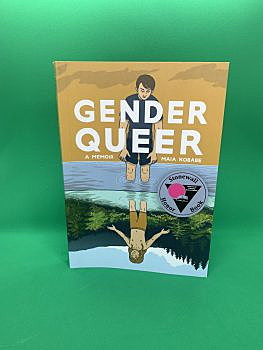 (Daily Montanan) The Billings Public School Board will decide whether to pull or keep two books in school libraries throughout the state’s largest public school district at its Monday night meeting, after a subcommittee recommended keeping one book and pulling another.

One resident, Nathan Mathews, objected to “Lawn Boy” by Jonathan Evison and Maia Kobabe’s “Gender Queer” in the Billings West High School and Career Center libraries, saying that both books constituted child pornography because of several passages in the coming-of-age books dealing with sex and sexuality. Both books have been frequently challenged throughout the United States, and both titles are at the center of a public library controversy in Kalispell.

The decision now rises to the full school board after working its way through a content challenge system that included reviews by district officials, members of the public, and a smaller portion of the school board. Both books received unanimous support for educators and district officials, recommending the books should stay on the shelves, after a review. The decision then went to a special committee set up to review the material, which also recommended unanimously that the books should remain in the secondary schools’ libraries.

However, when the books reached a five-member review comprised of public school board members, they voted to keep “Lawn Boy” by a 4-1 vote, but recommended removing “Gender Queer” on a 3-2 decision, with two board members issuing a written dissent, criticizing the majority for not following district policy.

“This book serves no purpose other than to sexualize children,” Mathews said of “Gender Queer,” a graphic novel.

Both books are stories that recount growing up and, in part, coming to terms with gender identity and sexuality. Both include some passages about sex or sexual acts. However, the books are classified as adult literature by the publishers and other library reference materials.

After a subcommittee of educators unanimously upheld keeping the materials in the libraries, Mathews followed the district’s appeals process, which triggered a review and recommendation of a committee comprised of educators and public, and eventually to another subcommittee of the board.

The district policy, 2311-P1, outlines the challenges to materials and has been in place since 2005. If the challenge is not resolved through speaking with a particular school’s principal, teacher or librarian, the district convenes a review committee, comprised of one librarian, one teacher, one parent and one building administrator.

“The committee members called to serve will not be from the school where the reconsideration request originated,” the policy states, and it will be convened no more than 10 “school days” after the challenge is filed.

Materials under challenge will not be removed while the challenge is ongoing, the district policy states.

In this particular case, Mathews appealed the unanimous decision of the administrators and the review committee, and the board chairwoman, Greta Besch Moen, had the option of appointing a subcommittee of the larger school board to make a recommendation to the full board.  Moen appointed board members Tanya Ludwig, Jennifer Hoffman, Scott McCulloch, Mike Leo and Brian Yates.

Ludwig, Hoffman and Yates voted to remove “Gender Queer,” but the two dissenting members, McCulloch and Leo pushed back on the recommendation, saying it violated the district’s own policy.

Leo and McCulloch said they supported the materials review committee, which found, “(We recognize) the potential concerns this book raises, but we feel it is an important resource for student going through similar experiences in life. It also provides a unique opportunity for students who wish to learn about others and gain empathy.”

They also quote extensively from the districts “Freedom to Read Statement,” which says, in part, “Private groups and public authorities in various parts of the country are working to remove or limit access to reading materials, to censor content in schools, to label ‘controversial’ views to distribute lists of ‘objectionable’ books or authors and to purge libraries… Censorship and suppression are needed to counter threats to safety or national security, as well as to avoid the subversion of politics and the corruption of morals.”

In this case, the two dissenting members said the responsibility for what materials students read isn’t just a matter of what content is on the shelves of the library, and stressed that the parents also should have a role in supervision.

The district’s review committee, comprised of Scott Lynch, Laura Gittings-Carlson, Alice Asleson and Kathy Pfaffigner reviewed both books, and rendered a unanimous decision to keep both, while acknowledging the concerns some parents may have with “Gender Queer.” However, the group also gave a defense of keeping it on the library shelf.

“One of the book’s many strengths is the opportunity it provides readers to understand the range of LGBTQ+ identities and the struggles those individuals face in understanding themselves, let alone trying to explain it to others,” the committee wrote. “This is particularly valuable in Montana as we are isolated by both distance and social scenarios from larger LGBTQ+ communities where more resources may be available for those who are struggling. The book provides a safe space to explore personal questions in a safe manner.”

However, Mathews pushed back on those recommendations in a short, hand-written appeal.

“I would like to appeal the committee’s decision to keep these two books, containing child pornography, in the SD2 library,” Mathews said. “It is my opinion that the committee members did not read the books and just took general reviews from online sources and pasted them to there [sic] decision letter.”

Members of the committee said that they had read both books.

Billings Public School Board will discuss the appeal on Monday night at its regular meeting. In materials presented by the district, it did not disclose how many copies of each were in district libraries.