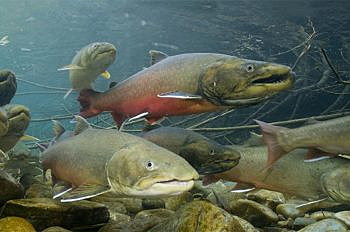 It’s well known and scientifically documented that bull trout, Montana’s largest native salmonid, require clean, cold, and connected rivers and streams to survive. That’s why, in the midst of a record-breaking hot and dry summer, Alliance for the Wild Rockies, Friends of the Wild Swan, and Save the Bull Trout are challenging the U.S. Fish and Wildlife Service’s inadequate Bull Trout Recovery Plan in the Ninth Circuit Court of Appeals.

As the National Park Service noted in public comments against the plan, “Bull trout are a species that has already lost 60% of its historic range. Delisting after losing up to another 10% of that range is not a recovery plan.”

Instead, it is an extinction plan.

The Endangered Species Act requires that recovery plans contain “objective and measurable criteria,” which, when met, would lead to a lawful delisting rule. This plan violates this legal requirement because there are no objective criteria, such as target population numbers, trends, or distribution.

Instead, the plan is to delist once “threats” are “effectively managed.”  However, it is simply impossible to determine if management has been effective without looking at the actual population numbers, trends, and distribution.  As stated by the Fish and Wildlife Service project leader from the Columbia River Fisheries Program Office: “Without a benchmark of success, there is . . . certainly no way to determine whether primary threats have been effectively’ managed.”

Accordingly, the “effective management” criterion was widely criticized by federal and state biologists as “nebulous,” ‘“extremely subjective,” “arbitrary,” and lacking any scientific basis. The State Supervisor of the Oregon FWS office summarized the primary concerns: “the lack of explicit demographic criteria in the plan, the subjective nature of the threats assessment tool, and the 75% recovery threshold.”

In 1988, the Endangered Species Act was amended by Congress to make the requirements for a recovery plan less discretionary.  Senator Mitchell clarified in the 1988 Congressional Record: “It is essential to the act’s integrity that recovery goals for the number of individuals or populations needed to ensure a species’ existence be based solely on the best available scientific data.”

Because the plan has no scientific basis whatsoever, it violates this express Congressional intent as well as the express language of the law.

Because bull trout need the coldest, cleanest water of all salmonids to survive, they are an excellent indicator of water quality. Since people also need very clean water and a climate that doesn’t bake us, what is good for bull trout is good for humans. If we can’t save bull trout, can we save ourselves? Please help us as we fight for bull trout and our own future.