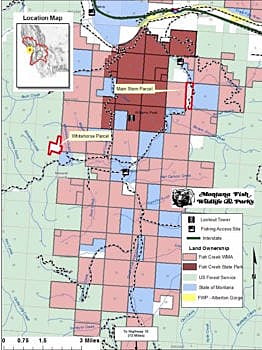 Montana Fish, Wildlife and Parks intends to capture a few more squares of the property checkerboard that makes up the Fish Creek Wildlife Management Area.

On Thursday, the FWP Commission approved a proposal to buy two private parcels within the Fish Creek WMA from Randy Koch for $900,000.

In addition to the 116-acre Whitehorse parcel on the WMA’s western edge, Koch is selling another 160-acre parcel that includes a 1.2-mile stretch of Fish Creek, upstream from the Big Pine fishing access.

Backcountry Hunters and Anglers spokesman Greg Munther told the commission that was the critical piece of property because Fish Creek is home to threatened bull trout and westslope cutthroat trout, which might not fare so well if the land morphed into a subdivision.

Also, with the land under FWP ownership, anglers would have access to Fish Creek along that entire stretch without worries of trespassing.

“All streamside areas are ripe for development for subdivisions, ranchettes and horse corrals. It’s a collision course for trout and subdivisions. This acquisition would prevent that,” Munther said.

Vickie Edwards, with Five Valleys Land Trust, said Koch – pronounced “cook” – has waited two years for the deal to finalize because he wants the land to be part of the WMA.

“It’s really voluntary private land conservation. He could sell to anyone, but he was very patient in working through the processes,” Edwards said.

The parcels are some of the few remaining private inholdings that existed when Plum Creek Timber sold its 41,000-acre Fish Creek property as part of the Montana Legacy Project in 2008.

The Legacy Project bought Plum Creek Timber property as conservation land around western Montana with grants from the federal Land and Water Conservation Fund, derived from a tax on offshore oil drilling.

The Nature Conservancy then acted as a go-between until 2010 when FWP allocated the $17 million-plus needed to complete the purchase. The lumber company’s sections were interspersed among state trust lands and small private parcels south of the Clark Fork River and Interstate 90 near Tarkio.

Since then, FWP has tried to buy the private property that came available to consolidate the area. If the Koch deal goes through, only five parcels remain as inholdings.

The proposal went out to public comment in March, and 72 out of 82 comments were in favor.

Montana Trout Unlimited has pledged to contribute $10,000 and NorthWestern Energy would provide the remaining $60,000 as part of the Thompson Falls Hydroelectric Project mitigation.

Montana Wildlife Federation spokesman Nick Gevock echoed Munther’s concerns about the threat of development encroaching into wild areas and said he was thankful that Habitat Montana funding was available to make the purchase possible.

“It’s amazing how one small parcel can have a big impact on a big landscape,” Gevock said. “Hopefully, we can get it through the state land board.”

That’s the next step for any state land purchase: The land board must also vote to buy the land. The board will consider the addition to Fish Creek WMA on July 16, but it could still fall apart.

After the 2016 election changed the makeup of the five-member board, some land purchases have not been approved.