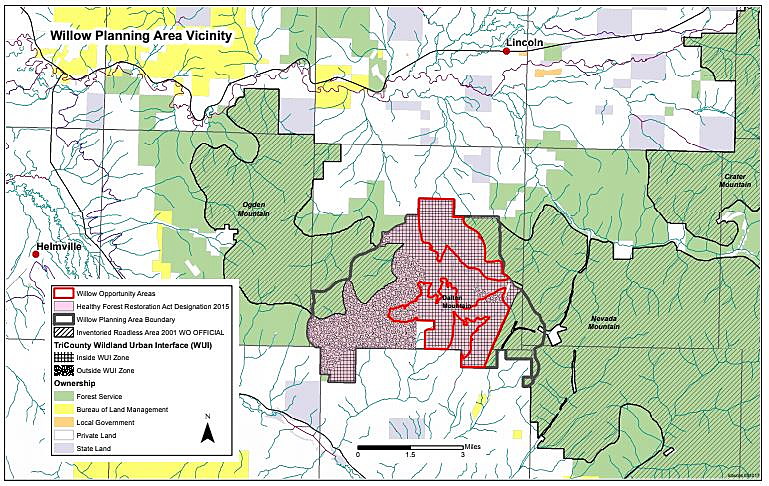 Environmental groups are challenging a Forest Service logging project south of Lincoln, citing the agency’s lack of concern for wildlife and abuse of the law.

“There’s a reason you have public oversight. The reason you want the government to have transparency is you got to make sure they aren’t lying to you,” said AWR executive director Mike Garrity. “When they say that everything they’re doing is restoration and fire prevention, a lot of it is just B.S. They just want to get the logs out.”

The 2,140-acre Willow Creek project is about 5 miles south of Lincoln and 8 miles east of Helmville in the mountainous mature forests surrounding Dalton Mountain Road in the Blackfoot River drainage.

Within that area, the Forest Service plans to log more than 1,300 acres, much of which would involve clear-cuts of more than 40 acres each. Prescribed burns would be used on about 600 acres, and 150 acres would be thinned.

While the Forest Service took input during project scoping meetings in 2017 in Lincoln, the agency didn’t go through the usual public process required by federal law. Instead, managers claimed the project was excluded from the need for public comment, because it was part of the 5 million acres that Gov. Steve Bullock identified as candidates for wildfire or disease forestry work under the 2014 Farm Bill.

The Forest Service doesn’t comment on pending lawsuits. But according to the May 29 decision memo signed by Forest Supervisor William Avey: “Through time and hearing concerns from the Blackfoot Valley community emphasized the need to address forest conditions including insect and disease mortality. We recognized an opportunity to utilize a provision of the Agriculture Act of 2014 (Farm Bill Authority) to utilize an established category of actions that would address some of these forest health concerns.”

The memo went on to say the project was prompted by the desire to clear some lodgepole-pine stands that died following the pine beetle outbreaks of the 2000s, and a few small, isolated stands of Douglas fir affected by spruce budworm. The memo said the project wouldn’t eliminate pests and diseases, but would “reduce dead fuel accumulations that could contribute to higher potential for severe stand replacing wildfire.”

But Garrity said the clear cuts would also destroy the mature ponderosa, Douglas fir and subalpine fir that have survived recent outbreaks. In addition, two houses sit near the project’s north boundary, so Garrity said it’s a stretch to claim the area is in the “wildland-urban interface” and needs clear-cutting.

“Like every forest, you can see some beetle-killed trees. But it’s not predominant, and that’s why they want to go in there. They prefer to cut live trees,” Garrity said.

The environmental groups say one other detail the Forest Service didn’t address was the location of the project, which is bracketed by two inventoried roadless areas: Nevada Mountain and Ogden Mountain. So the 26 miles of new and reconstructed road proposed in the project is a problem.

The 9th Circuit Court of Appeals has ruled that if the Forest Service wants to build roads in areas adjacent to inventoried roadless areas, it must first analyze the entire roadless complex for wilderness potential first, because roadless area boundaries were sometimes drawn arbitrarily, Garrity said.

But the Forest Service didn’t do that.

In fact, the 2001 Roadless Rule prompted the Forest Service to abandon the Willow Creek project when it was first proposed in the late 1990s. Back then, it was called the “Nevada-Dalton project,” and the Forest Service got as far as issuing a draft environmental impact statement that identified the area’s significance as a wildlife corridor.

With the Western Governor’s Association recently encouraging the preservation of wildlife corridors, the Willow Creek project might need more assessment. Its protection might help delist grizzly bears after a Missoula federal judge forced the U.S. Fish and Wildlife Service to put Yellowstone grizzly bears back on the Endangered Species list because of the lack of connectivity between populations.

So wildlife habitat is the other piece of the lawsuit. The groups argue that the clear-cutting would not leave enough trees on elk summer and winter range. There’s also concern about logging-related sediment entering headwater streams that lead to the Blackfoot River.

“Clearcutting 2 square miles of old growth forests is not forest restoration,” said plaintiff Sara Jane Johnson, a former Gallatin National Forest wildlife biologist. “Ninety-five percent of forest species in the area would be hurt by bulldozing 3.7 miles of new roads to log more than 2,100 acres of elk hiding cover. Elk will be driven out of public lands onto private lands, resulting in fewer elk hunting opportunities for hunters, game damage to private lands, and impacting the ability of Montana’s wildlife managers to meet their elk population objectives.”

The Forest Service concluded the clearcuts would likely have an adverse effect on grizzly bears and may affect Canada lynx, although not adversely. The U.S. Fish and Wildlife Service agreed grizzly bears could be affected but concluded the project wouldn’t threaten species survival.

The environmental groups intend to challenge that but will delay because of a requirement to give the U.S. Fish and Wildlife Service 60 day’s notice of their intent to sue based on endangered species.

But under a presidential administration that often favors corporations over the environment, some groups don’t trust that all projects are in the public interest. Particularly when a number of wildfire experts question whether logging reduces fire risk better than prescribed burns or fire-proofing homes.

“They tried to do an categorical exclusion 10 years ago and pulled it too. So this is the third time in the past 25 years,” Garrity said. “I think the main reason is it’s old growth, so there’s a lot of big trees that loggers like.”