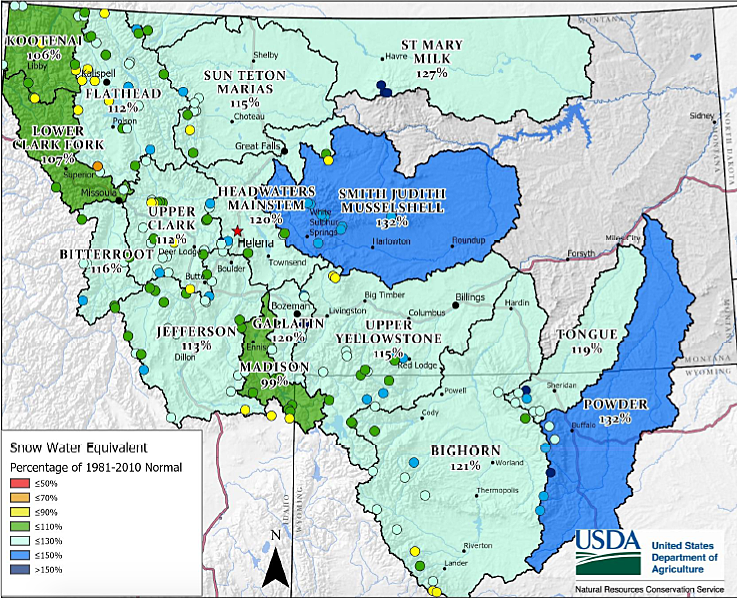 If 2020 continues to bring snow like it has since January, streams in Montana have a good chance of flowing well throughout the summer.

As of March 1, Montana has average to above average snowpack in mountains across the state, thanks to moisture flowing into the state from the northwest during most of February, according to the most recent Natural Resources and Conservation Service water supply report. That puts the state slightly ahead of where it was a year ago.

While mountains in the central and southern parts of the state benefitted most, all but the Kootenai and Madison basin regions received significant snow in February.

In fact, seven snow courses and SNOTEL weather stations on the north-facing slopes of the Pintler, Big Belt, Gallatin and Snowy Mountains had record February snows as weather systems dropped their moisture loads to rise over the mountain ranges.

Major river basins on both sides of the Continental Divide now have snowpack amounts that are 12% to 15% above the 30-year average. The Powder and Smith-Judith-Musselshell basins have the most at 132% of normal while the Madison has the least at 99%.

The snowpack side of the story is good, but it may not be enough to offset low precipitation amounts that a few parts of Montana were suffering before the snows blew in. For example, some individual sites around Kalispell, Havre and West Yellowstone have registered less than 70% of their average precipitation. As a result, the Lower Clark Fork and Madison river basins are slightly low with only about 90-95% of the precipitation that falls in a normal year.

NRCS water supply specialist Lucas Zukiewicz cautions that even though snowpack is good, we aren’t in the clear for summer yet.

“Even though spring starts on March 19, there is still typically a lot of winter left to come in the mountains, and the juicy months are on the horizon for some of our east of the Divide river basins. These months can make or break our spring and summer streamflows,” said Zukiewicz. “While we’ve got more water than we typically have stored in the snowpack on March 1, I’ve learned from experience it’s never wise to assume we will be in the same shape come May 1.”

By March 1, Montana is just three-quarters of the way to its peak snowpack amounts. So moisture received in March and April is vital to getting the state to snowpack levels that get us through the summer. We don’t want things to dry out now, and things aren’t looking too good, at least for the first part of March.

Long-range forecasts issued by NOAA’s Climate Prediction Center for the next two weeks indicate better-than-normal chances of above-average temperatures across the state and near- to below-normal precipitation.

Ultimately, it comes down to how snowpack and precipitation translate into summer streamflow predictions. March is still early for accurate predictions, but at this point, streams in most of the state are predicted to have average flows. The only questionable streams at this point are the Madison River headwaters and a few streams along the Rocky Mountain Front.