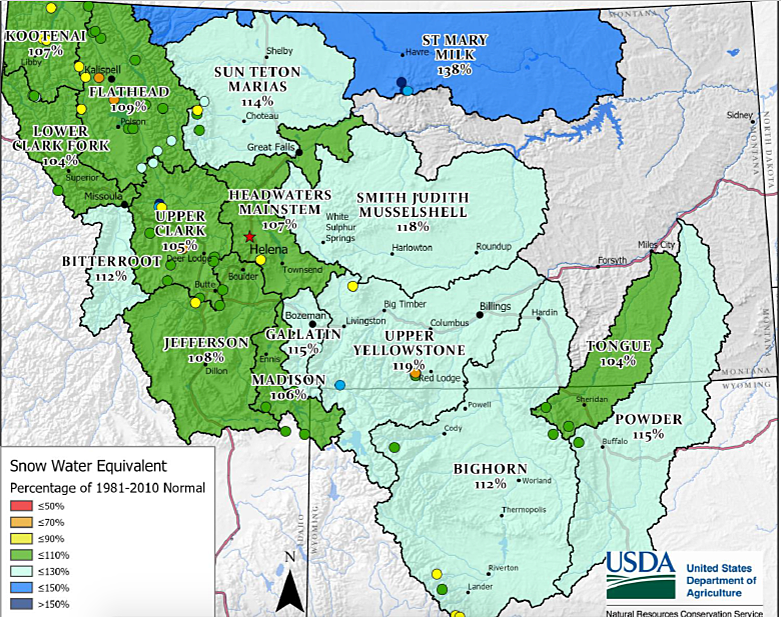 The winter months have been a rollercoaster of high and low snow amounts, but luckily, the snows of January and February are still hanging on in Montana’s mountains.

Statewide, Montana’s snowpack amount is about normal for this time of year, and that bodes well for spring and summer runoff, according to the Natural Resources and Conservation Service April 1 report.

But March’s low precipitation could throw a wrench in the works.

“The news is as good as we get closer to runoff season this year, aside from one small lower elevation range west of Flathead Lake, most mountain ranges in Montana have a snowpack that is near to above normal for this date, even though March snow totals were below normal in some regions,” said Lucas Zukiewicz, USDA Natural Resources Conservation Service water supply specialist for Montana.

Forecasters consider the April 1 snowpack as a good indicator of streamflow conditions in the summer ahead, although April still needs to provide its share of moisture. For that reason, the May 1 report is best. But, barring uncharacteristic heat or drought, Montana is looking good for summer, although the mountains surrounding most river basins aren’t quite as flush with snow as they were one month ago due to a dry March.

March temperatures were themselves a rollercoaster ride. The month came in like a lamb, with warm temperatures that set new records on March 6 for highest average daily temperature in many mountain ranges. But in the second week, Arctic air punched south out of Canada, setting new records for lowest daily average temperatures in mountains around the north-central part of the state.

The rest of the month saw average temperatures for March, but overall, mountain temperatures remained below average, helping to retain the snowpack. But little snow was added over the month.

Almost all the basins west of the Continental Divide, plus the upper Missouri River basin between Helena and Great Falls, have slipped from having snowpack more than 110% of normal at the end of February to having about average snowpack. Only the Bitterroot basin has held on with 112% of normal.

Runoff from that snowpack may be critical, because some western valley locations are drying up. Monthly precipitation totals weren’t great in the mountains west of the Divide, but they were dismal in some of the valleys. Some sites, such as the Missoula and Kalispell airports, reported receiving less than 30% of the normal precipitation for the month.

Snow is hanging on a little better in some areas east of the Divide, thanks to that mid-month shot of cold temperatures and a few storms. The basin that saw the largest increase in snowpack statewide is the St. Mary-Milk along the Canadian border, which jumped from 125% at the beginning of March to 138% by the end.

The Madison and Gallatin basins also saw small increases, thanks to a few storms in mid-March that brought above average snow to the west side of the Greater Yellowstone region.

Yet, even in the east, precipitation in some areas was well below normal for March. The Tongue, Powder and Smith-Judith-Musselshell basins received only 45% to 55% of their normal precipitation. Add that to the abnormally dry November and December and the result is some rivers may still run low, despite the decent snowpack.

Overall, DNRC forecasters are predicting most streams should see at least average flows through July 31. And the state is better off than last winter, when the spring runoff started in mid-March, causing water reserves to drop too early.

Fortunately, the long-range forecast for April shows a good likelihood for below normal temperatures and about average precipitation.