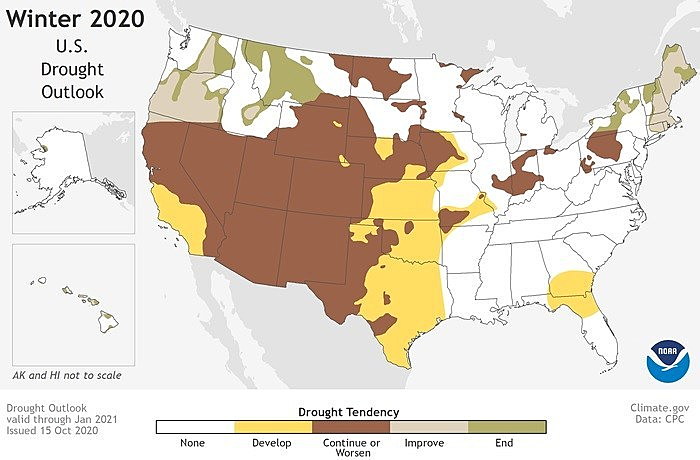 (CN) — Nearly half of the lower 48 states are in some level of drought, according to federal climate scientists who aren’t optimistic about winter rains improving the situation — particularly in the hard-hit American West.

About 47% of the contiguous United States have plunged into dry conditions as a combination of the lack of precipitation and higher than average temperatures, according to the National Oceanic and Atmospheric Administration’s monthly report.

“These drought conditions are not unprecedented, but they certainly cover a large portion of the western U.S.,” said Karin Gleason, a NOAA climatologist.

The drought abated in a few patches in the northeastern United States and the Pacific Northwest got some much-needed rain, but it broadened and intensified throughout the West, particularly in the Four Corners region and throughout Texas, Gleason said.

The drought conditions are particularly concerning as the western United States continues to grapple with a historic fire season.

Dan McEvoy, a regional climatologist with the Western Regional Climate Center, said dry conditions throughout the West last year paved the way for the explosion in wildfires this summer and fall.

“Last year was dry for the bulk of California, the Sierra Nevada and into the Cascades,” he said. “Many locations were in the bottom 10% of all years in terms of total precipitation.”

The dry weather patterns were not unique to California, as a lack of seasonal monsoons for two years running means parts of Arizona, Utah, Colorado and New Mexico are extremely dry too.

The lack of precipitation also combined with high temperatures to foster conditions where evaporation occurred at an increased rate, lowering the moisture content in vegetation and creating a landscape ripe for wildfire.

As a result, much of the American West grappled with unprecedented fire conditions. Colorado, Oregon and California all experienced their largest wildfires in recorded history this past season.

“The fires also released massive amounts of smoke, which degraded air quality as far as the East Coast,” McEvoy said.

Unfortunately, many of the areas plunged into a drought at present are unlikely to see relief in the near future.

Dan Collins, a meteorologist with the climate prediction center, said that La Niña conditions are likely to prevail throughout the winter and into the spring.

“It means a probability of lower than average precipitation for Southern California, the Four Corners region and much of Texas,” Collins said.

The lack of rain for the southern portion of the United States means the wildfire conditions, which have improved greatly in Northern California after a bout of rain this week, remain dangerous in Southern California.

“Southern California has an above-normal potential for wildfire through December,” McEvoy said. “There’s been large wildfires in Southern California in December and January in the past, so fire season is certainly not over for the southern half of the state.”

The danger for landslides and flooding is pronounced throughout the Golden State, as any atmospheric rivers — storms with intense and often prolonged precipitation — could hit burn scars left behind by the active fire season and cause rapid erosion.

“There will definitely be a danger of landslides and flooding going through the winter,” McEvoy said.

The report did share some good news. While October was the fifth warmest such month in recorded history, it fell short of continuing 2020’s trend of new monthly temperature records.

While 2020 may not be the hottest year on record globally as a result, the improvement is only moderate.

“2020 is very likely to be one of the top three warmest years on record,” Gleason said.