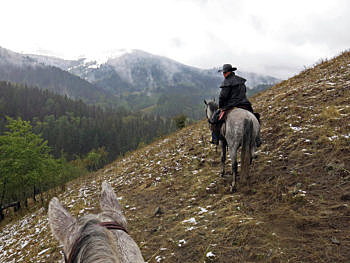 For grizzly bears to survive, farmers and ranchers need nonlethal tools that can reduce conflict before lethal means are required. But financing and educating people about those tools is the first hurdle.

After working together to save their valley from overdevelopment and maintain its rural, even wild nature, the landowners of the Blackfoot Challenge have become known for several innovative projects that have sustained agriculture while keeping wildlife in the area.

One of those projects, a carcass pickup program, was cautiously started in 2003. Normally, ranchers don’t like people knowing if they lose livestock, but the timeworn practice of leaving a dead calf on a private “bone pile” had the unwanted effect of drawing predators closer to homes and herds. So instead, a trusted driver was hired to pick up carcasses from the ranches so they could be composted.

Former Blackfoot Challenge executive director Gary Burnett said the carcass pickup program was started with the help of a U.S. Natural Resources Conservation Service Conservation Innovation Grant, which helped pay the cost for a few years. The program worked and continues today, but only because of the organization’s fundraising abilities.

Now, with the help of another Conservation Innovation Grant of more than $886,000 announced last week, Burnett and 19 other landowners and landowner group leaders hope to figure out how to do that.

The problem is that NRCS programs usually pay for one-time upgrades or modifications that produce a known result, like an electric fence around a grain bin or chicken coop. A rancher knows how much wire he needs and can apply for a grant to pay half the one-time cost. The NRCS knows the desired result will be achieved: the wire will keep predators out.

But it’s a lot harder to quantify how much money is needed for a carcass pickup or range rider program, because they’re not a one-time cost. And the cost and results may vary depending on the location.

The Blackfoot Challenge knows how much its program costs. But costs may be different for the Swan Valley Connections, which wants to start a program to collect road kill along U.S. Highway 83.

Over near Ennis, the Madison Valley Ranchland Group started its carcass pickup program last year, said project director Linda Owens. There, the truck drives 70 miles one way and 20 miles the other before heading to the composting site.

“We’re definitely stepping up and showing that ranchers are willing to work at it. We’re not waiting for somebody else,” Owens said. 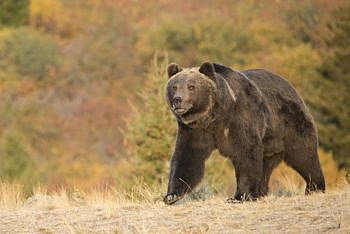 The program is off and running but doesn’t address the biggest issue for Madison Valley ranchers. Unlike the Blackfoot Valley, wolves and grizzly bears don’t hang out in the valley bottomland. So Owens’ group will spend their part of the grant money improving and studying their range rider program in U.S. Forest Service grazing allotments higher in the mountains.

Range rider programs can vary widely too. Alex Few, Working Wild Challenge program manager for the Western Landowners Alliance, said she talked to a woman last week who was used to riding in the more open lands near Bozeman.

“She showed up to range ride in Northwest Montana and was overwhelmed by how different the landscape was and wondered how she would do what she was hired to do in a landscape with such dense forest,” Few said. “This grant gives us the opportunity to figure out what are the best practices in different landscape types. And having such diverse partners will help us share with the ranching community a large amount of knowledge.”

The partners include groups and individual landowners from seven Western states, although most are in Montana. When Burnett first tried for the grant in 2019, he contacted Montana groups but they weren’t able to put it together in time.

When they tried again this summer, they used the West-wide Conflict Reduction Consortium to put out the call. Within two weeks, landowners from Montana to California and Arizona had put up $1.2 in matching funds.

“They were looking for a lot smaller amount to request for a grant. But there was so much local money that was put up to be matched,” Owens said. “They were afraid that if they asked for too much, they wouldn’t get anything. I said, ‘You gotta do the ask.’ And we were fully funded. They realized how critical this area is and what’s happening here.”

Burnett, now Heart of the Rockies Initiative executive director, said the NRCS ranked their proposal as the top wildlife application in the country.

“It’s probably because of the extended reach – the broad participation of more than 600 users potentially,” Burnett said. “We’ve got three years to figure this out. So we’re hopeful that we can put these innovations into some sort of practice that can get sustainable funding sources.”

Consistent scientific studies are the key to the project. Even though some ranchers already use tools like range riding and fladery – a series of small flags on fence wire that scare wildlife – there’s been little if any study of their use and effectiveness, especially among different landscapes.

“Oregon said ‘We’ve tried (fladery) before and they don’t work. But if you try fladery and you think it’s going to work for a year, it won’t,” Burnett said. “The question is how do you place fladery on the landscape and how long and where and how much does it cost?”

Burnett said the U.S. Department of Agriculture Wildlife Services has a research protocol and data sheets that landowners will use. The group will publish annual reports but Burnett is hoping the final report will reveal the effectiveness of the various methods and the range of their costs. And maybe they’ll have figured out how to create a funding program to pay for services like range riding.

“There’s a movement within the agencies. The Forest Service is considering whether you can pay for outcomes, not how you get there,” Burnett said. “Local (agency) managers should have flexibility – it doesn’t mean you’re not accountable.”

A version of the report will be provided to landowners so they can know the best practices for their area.

“To survive and thrive, ranchers are going to have to learn to step out of their comfort zone and be at the table,” Owens said. “I wan to know that grizzlies, wolves and ranchers can thrive and exist together. I think it’s possible. But it’s going to take changing mindsets.”

Few said the responsibility and cost of reducing conflict with public wildlife usually falls to private landowners, which can cause tension. Funding to offset those costs could help change mindsets, and that money would probably come from a Farm Bill allocation.

“There’s an opportunity to allow the public to support the public’s wildlife through Farm Bill funding,” Few said. “We’re hoping to be able to provide additional resources so the economic viability of these ranches stays intact along with the grizzly bear and wolf habitat they provide.”