Montana State Parks has installed new technology to help managers learn more about park visitation. With the huge increase in state population and tourism over the past year, the information is critical to preserving park conditions.

Thanks to a grant from the University of Montana through the Institute for Tourism and Recreation Research, Montana State Parks was able to dig up its old magnetic counters that were buried at park entrances and replace them with new infrared beam counters that allow managers to analyze visitation numbers hour-by-hour and day-by-day.

Counters placed at park gates will log vehicles driving through as usual. But now, park staff has been able to put counters at trail entrances to count hikers and bikers, too. That will make visitor counts more accurate at places like Travelers Rest, Frenchtown Pond and Milltown state parks that are getting more bike and pedestrian use, Flynn said.

The last counter of the state was installed last week.

“Our region was a little bit of a guinea pig for the state on this,” Flynn said. “It’s going to let us know when our parks are busiest. We’re also able to track in places like Council Grove where we don’t close the gate – we’re able to see when people are in there after dark.”

The Institute for Tourism and Recreation Research tracks Montana’s tourism and recreation trends, from how much is spent on tourism each year to which sites are more popular. For example, in 2019, the Flathead Lake state parks were the fourth most visited sites in the state behind Yellowstone and Glacier national parks and hot springs, according to ITRR data. The improved counters will help the institute with its own data collection.

As part of the rollout, Montana State Parks hired interns to double-check the infrared counts to ensure accuracy and to record resident versus nonresident vehicles. 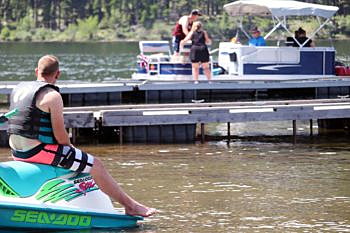 That will be important information with two more entrances being added to Milltown State Park over the next year. The park currently has three entrances but gets a lot of additional traffic due to the popularity of floating the Clark Fork River.

Statewide, park visitation in 2020 was a 50% increase over that of 2019 and almost 2.5 times what it was a decade ago. Flynn said part of that increase could be due to the new counters recording more people in 2020, but there’s no question that people swarmed to the state in record numbers last summer.

While the crush of people challenged state parks staff, it proved to the Montana Legislature how important state parks are to visitors. That led to the state parks budget making it through the legislative process relatively unscathed, Flynn said.

There weren’t as many campground reservations this spring as last year, but that’s probably because children have returned to school and not as many people are working remotely, Flynn said. The summer reservations, on the other hand, are higher than they were last year, Flynn said.