Beavers may not be happy with some new tree fencing along the Clark Fork River, but it’s the best thing for them and people living and floating nearby.

Wednesday was a tough day to be working outside. By noon, temperatures were already in the low 90s as three members of the Clark Fork Coalition unloaded their gear behind the Cobblestone Condos on East Broadway. Condo air conditioning units hummed like a swarm of bees while father below, stoneflies swirled in the sunlight that glinted off the Clark Fork River.

Growing out of the steep bank that dropped to the river, about 18 to 20 cottonwood trees shaded the backs of the condos and the river below. The Clark Fork Coalition was there to make sure the trees would continue to cast shade for years to come.

Early this spring, the Cobblestone Condos homeowners association had called Montana Fish, Wildlife & Parks after a resident had noticed something had been gnawing on one of the trees. The telltale sign of beavers. Something must be done.

Chott knew the only thing that was needed was to wrap fencing around the bottom of the trees to send the beavers elsewhere. About a month ago, she tried to do the work herself, but realized she’d need more help because several of the mature cottonwoods were fairly massive, too big for her to wrestle the fencing around herself.

She assembled a work crew but then had to put the project on hold as the river rose with spring runoff.

By Wednesday, the river had gone down but the heat had gone up. Chott couldn’t put the project off any longer, because she’s already got seven other tree-wrapping projects lined up.

Now in its third season, the program to reduce human-beaver conflicts is gaining traction. In 2019 and 2020, Chott completed about seven fencing projects each year.

This year she’s already installed fencing for a private landowner in the Blackfoot Valley and the next project involves wrapping aspen trees for a landowner on Racetrack Creek in the upper Clark Fork region.

“It keeps growing every year so that’s what you want,” Chott said.

The fencing projects keep landowners happy because they get to keep their trees, and they keep beavers alive because landowners don’t resort to trapping them just to solve the problem. Similarly, Chott and her colleagues also use other methods from placing fencing around culverts to keep beavers from damming them to installing pond levelers above beaver dams to reduce the amount of flooding. 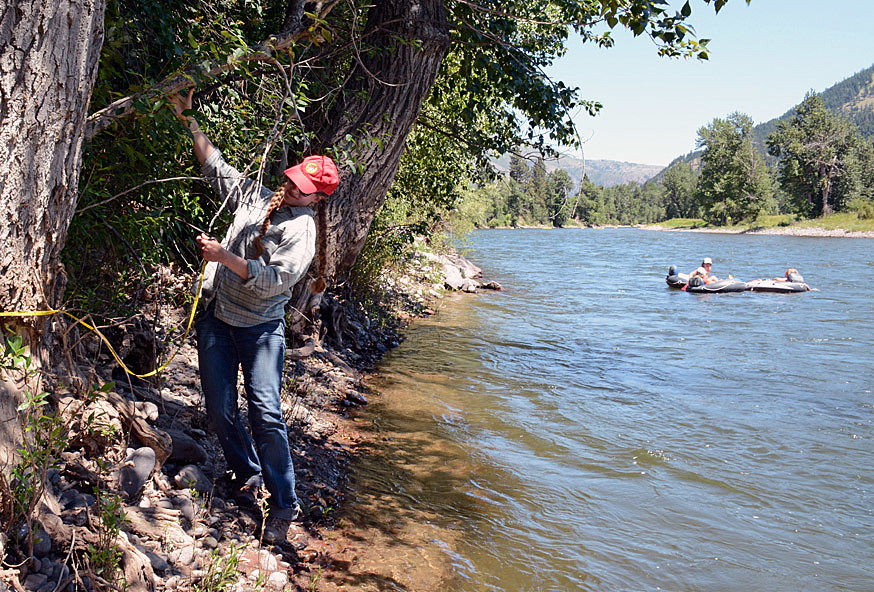 The point of such projects is to increase people’s tolerance for beavers. Not only are they fascinating creatures, but their dams help keep more water in stream valleys, something that is increasingly important as Montana descends deeper into drought. Some water conservation districts even pay for structures that mimic what beavers do for free.

On Wednesday, Lily Haines and Andrew Gorder helped Chott measure the circumference of the trees – some were more than 10 feet around – and then cut large enough sections of wire fence to fit around the tree.

The challenging part was that the steep slope made the bottom of one side of the tree much higher than the other. Chott said the important thing was to protect the trunk on the upper slope of the tree because that’s where beavers chew. After that, it was just a matter of cutting the fence mesh in creative ways to make it fit the tree.

The main concern is a tree falling toward the condos, causing damage. But since beavers chew on the uphill side of the tree, it’s more likely the trees would fall into the river. The problem with that was evident as several groups of inner-tubers went floating by while the trio worked.

When one floater asked the workers what they were doing, Haines explained their work would keep beavers from toppling trees into the water. The floater shouted a cheery “Thank you” as he and his friends bobbed out of sight.