Montana is one of many regions that have much to lose if the world doesn’t take immediate action to stem the effects of climate change, according to a new report.

The Interagency Panel on Climate Change this week released a portion of its sixth report that updates the known effects of climate change and the world’s associated vulnerabilities. According to all the research included in the 3,675 pages of the report, the vulnerabilities are increasing and the world doesn’t have much more time to make the changes to ward off the worst of climate change effects.

“This report is a dire warning about the consequences of inaction. It shows that climate change is a grave and mounting threat to our wellbeing and a healthy planet. Our actions today will shape how people adapt and nature responds to increasing climate risks,” said Hoesung Lee, Chair of the IPCC, in a release. “Half measures are no longer an option.”

Much has changed since the first report was released in 1992, although many changes of been documented just since the last report. Weather and climate extremes – including extreme heat on land and in the ocean, heavy precipitation events, drought and fire weather – have led to some irreversible effects as natural and human systems are pushed beyond their ability to adapt. Approximately 3.3 to 3.6 billion people live in regions and situations that are now highly vulnerable to these climate change effects, according to the report.

Most notable is that the extent and magnitude of climate change impacts are larger than estimated in previous assessments. Things are happening faster than scientists previously predicted because of widespread deterioration of ecosystem structure and functioning and reduced resilience, as well as shifts in seasonal timing. Issues like the melting of Arctic permafrost and loss of polar ice can feedback on various cycles, causing the acceleration of greenhouse gas release and warming of the oceans.

The report has three key messages for Montana: temperatures here are warming more than those across the nation; precipitation will increase during the spring leading to possible flooding; but decreased summer moisture and higher temperatures could worsen drought.

Those who follow the monthly snowpack reports over the past few years know Montana has seen average monthly temperatures during early winter that are far above normal. Winter overall isn’t as cold as it used to be, as evidenced by data going back to the year 1900 showing the trend in the number of very cold days – days that don’t get above 0 degrees – is decreasing. 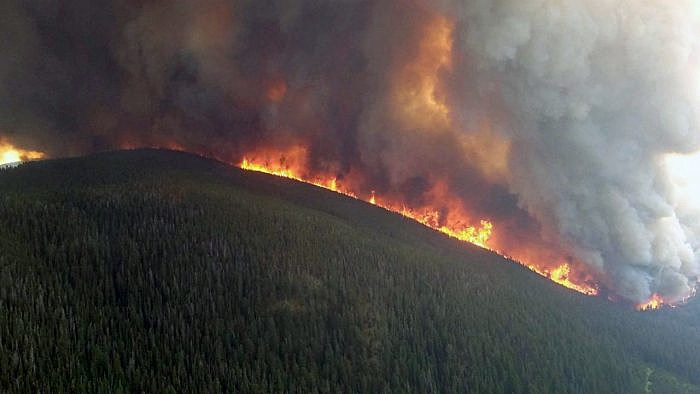 That contributes to the fact that Montana’s average annual temperature has risen almost 2.5 degrees Fahrenheit since the beginning of the 20th century. However, the past 21 years represent the warmest period on record.

Climate change affects the extremes, making the hot days hotter and cold nights less cold. The number of warm nights each year in Montana – nights that didn’t dip below 70 degrees – during the 2000s was about half again as many as during the 1940s through the 1990s.

In the future, even if greenhouse gas emissions are reduced, annual average temperatures are projected to exceed historical record levels by the middle of the century. Increases in heat wave intensity, like the heat domes that hit Missoula last summer, are projected, while the intensity of cold waves is projected to decrease. Projected rising temperatures will also raise the snow level and increase the amount of precipitation falling as rain instead of snow, similar to what is happening in Missoula this week. Higher spring temperatures will also result in earlier melting of the snowpack, further decreasing water availability during the summer months.

A majority of climate models project less moisture for Montana during summer. Rising temperatures will increase the rate of soil moisture loss during dry spells. Thus, summer droughts are likely to become more intense, potentially leading to increases in the frequency and severity of wildfires.

So it’s good that a recent Colorado College Conservation in the West poll showed that 75% of poll participants said climate change is a “serious problem,” although that percentage dropped to 69% when only Montana respondents were considered. But less than half of voters agree that immediate action is necessary. This report indicates that needs to change.

The report says that increased heatwaves, droughts and floods are already exceeding plants’ and animals’ tolerance thresholds, driving mass mortalities in species such as trees and corals. These weather extremes are occurring simultaneously, causing cascading impacts that are increasingly difficult to manage.

This past week, thousands had to evacuate due to some of the worst flooding in eastern Australia in decades. At the same time, wildfires are raging down in Argentina sending clouds of ash and smoke as far as Paraguay following two years of severe drought.

United Nations Secretary-General António Guterres said in a release that the report’s conclusions are unlike anything he has ever seen, calling it an “atlas of human suffering and a damning indictment of failed climate leadership.”

To avoid the most devastating projections, the nations of the world must limit global temperature rise to 1.5 degrees Celsius or 2.7 Fahrenheit. In order to do that, the science shows the world must cut emissions by 45% by 2030 – only eight years from now – and achieve net-zero emissions by 2050.

“According to current commitments, global emissions are set to increase almost 14% over the current decade. That spells catastrophe. It will destroy any chance of keeping 1.5 alive,” Guterres said.

At the Climate Change Conference in Glasgow, Scotland, in November, world leaders resolved to enact changes to avoid shooting past the 1.5 limit, but little action has materialized.

Now, as the Ukrainian invasion dominates the world stage, Congressional leaders call for more American oil and gas development, particularly on public land, as oil companies pull out of Russian oil fields. But climate scientist Svitlana Krakovska, head of Ukraine’s delegation, said Ukraine should not be a distraction from pursuing efforts to rein in climate change.

“Human-induced climate change and the war on Ukraine have the same roots: fossil fuels and our dependence on them,” Krakovska said at a session of the IPCC, according to The Washington Post. “We will not surrender in Ukraine. And we hope the world will not surrender in building a climate-resilient future.”