The 79-year-old director of the National Institute of Allergy and Infectious Diseases (NIAID) has been the soft-spoken, reliable professional addressing major health emergencies for political administrations dating back to Ronald Reagan.

His view of the current situation, at a recent White House briefing, was certainly straightforward: “As I’ve said many times, and I’ll repeat it: The worst is, yes, ahead for us. It is how we respond to that challenge that’s going to determine what the ultimate endpoint is going to be.”

Fauci’s counterpart more than 100 years ago was a straight shooter, too.

Dr. George A. Soper was a military epidemiologist in the Army in the early 20th century. He helped the state of New York deal with typhoid outbreaks in 1903, 1904 and 1906.

Most notably, he was the man who tracked down Mary Mallon, the infamous Typhoid Mary, and contributed greatly to the world’s knowledge of disease “carriers.”

In later years, Major Soper shared the story in an address at a conference of the surgeons of the U. S. Army’s Sixth Division.

“In the winter of 1906, I was called upon by Mr. George Thompson, of New York City, to investigate a household epidemic which had broken out in the latter part of the preceding August at the Thompson country place at Oyster Bay,” said Soper. 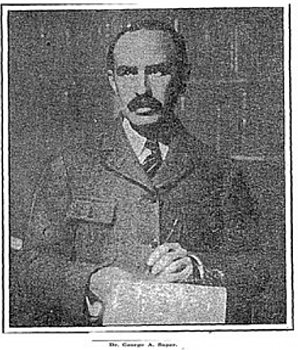 A few months later, Dr. Soper was alerted to two typhoid cases at a New York home, in which the cook turned out to be the same woman who had been in households he’d investigated in prior typhoid cases.

“It was at this house that I had my first interview with Mary. I expected to find a person who would be as desirous as I was for an explanation of the way in which the typhoid had followed her. Certainly she could not have failed to be impressed by the strange fatality with which the disease had broken out wherever she went.

“My interview was short. It started in the kitchen and ended almost immediately at the basement door.” Mary Mallon refused then, and would continue to flatly refuse, to talk with Soper or anyone else.

“It was evident that, although I had succeeded in collecting only fragments of her history, there was a remarkable resemblance between these parts. In each instance, one or more cases of typhoid had occurred in households after the cook had arrived, or among people who had come to live near her and eaten of the food which she prepared.

“I brought the details to the attention of the New York City Department of Health on March 11, 1907,” and Mary Mallon was arrested and jailed.

Soper again attempted to interview her, but “this interview was shorter than the other two. Without uttering a word Mary retreated with dignity to the toilet, leaving me standing alone in the room.” 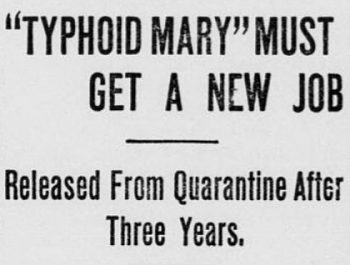 Over the next decade, Mary Mallon was in and out of custody repeatedly, but blood and stool samples had clearly established her as the carrier known as Typhoid Mary.

By the time of the Spanish flu pandemic, George A. Soper was a colonel in charge of the U.S. Army’s Sanitary Corps and issued recommendations to Americans to keep safe against the pandemic.

It’s instructive to compare his advice of 100 years ago with today.

With that in mind, I’m heading outside to breathe some fresh air. But first – where are those loose-fitting jeans?