Protests in Montana and nationwide over the death of George Floyd (and the larger issue of systemic racism in this country) should give us all pause – and reason to look back at this country’s and this state’s history in that regard.

Questions being asked today have been asked many times before.

Jesse L. Brooks, a Great Falls High School senior, posed some of these questions in the school newspaper, the Round Up, under the headline “Race Problem In The West,” on May 27, 1910.

Wrote Brooks: “Education is what is making and is going to make us a great people (and) higher education should be emphasized. But once African Americans become educated, do they become a threat? Is it jealousy that makes you hate us and persecute us so? Or is it because of our black skin?

“If employment is cut off on all sides by prejudiced beings, who refuse to work with a man because he is of a little darker color, the result is idleness for the oppressed … (and) idleness is a great hindrance to any race or class of people. Out of this idleness comes laziness, and crime. This is the predicament that negroes (sic) in the West are in today, and this is the one thing that leaders of the race are trying to eliminate.

“We have to fight not only against our prejudiced white brothers in this great struggle, but we have to fight against ignorant, immoral negroes (who) can neither read nor write and they only make the struggle harder for honest negroes.”

Julia C. Sherman, the author of a University of Montana publication, “African Americans and Montana’s Criminal Justice System – A Historical Timeline,” points out the many historical challenges faced by Montana’s African Americans in that “great struggle” to which Jesse Brooks referred.

Migrating to Montana in the years following the Civil War, African Americans confronted the same prejudices they had faced in the South.

In 1867, Helena decided “to experiment with black voting in city elections; encouraged by the Republican administration in Washington. Gangs of Democratic roughs circulated through town, warning African Americans from the polls and threatening violence should they attempt to vote.”

What followed was the Helena Election Riot of 1867, after an African American was murdered “on mere suspicion that he intended to vote in that day’s election.”

The Montana Territorial Legislature legalized one form of racial discrimination in the 1870s, passing a law segregating black children in public schools. A petition to reconsider the decision, signed by over 100 Helena residents, both black and white, was rejected by the lawmakers.

But in 1882, “Helena voted 195 to 115 against mandating the dual school system,” thanks to “lower voter turnout, reluctance to continue the high taxes caused by the system, and a heavy turnout of black voters.”

Sherman’s work, published by UM’s College of Humanities and Sciences/African American Studies, shows Helena as the Montana city with the largest African American numbers historically, peaking at 3.4% of the total population in 1910.

Helena had “the first African American-published newspaper in Montana, The Colored Citizen: Devoted to the Interests of Colored Americans … primarily to sway black voters to vote for Helena to be named the state capital,” in 1894.

In 1902, The New Age, a weekly publication, began in Butte, followed by The Montana Plaindealer debuting in 1906 in Helena. 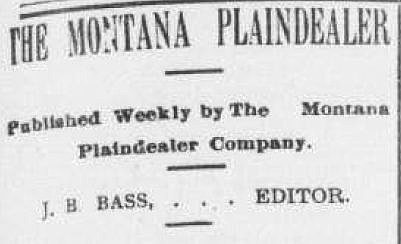 The Plaindealer declared, “We shall at all times advocate the principles of PEACE, PROSPERITY and UNION (and) shall stand up for the right and denounce the wrong. Our mission shall be at no time to stir up strife, but rather to pour oil on the troubled waters.”

The owners of the newspaper, Joseph B. and Charlotte Bass, felt “in this section of the country there are great opportunities for the frugal and thrifty in mining, agriculture and other pursuits.

“We shall advocate development along these lines, the infusion of new blood, and encouragement will no doubt bring gratifying results to the colored race in the great Northwest.”

Booker T. Washington, lecturing in Montana cities in 1913, said, “I believe there is room enough, justice enough, and good sense enough to enable the two races to live here side by side and work out their own destinies.”

There were positive milestones over the years. Among them, Sherman noted:

* Henry Baker appointed postmaster of the Capitol building in Helena – the first black person appointed to a state office in Montana. 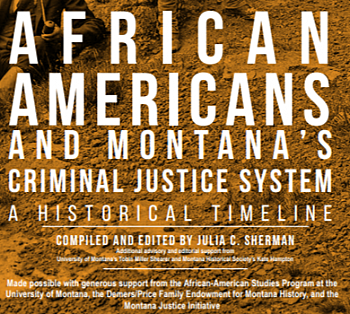 But as the Billings Gazette reported in 1975 (and, to this writer, it appears to be the case in Montana to this day), the black community remains largely “invisible” to the non-black community. The Rev. Bob Freeman, pastor of Wayman African Methodist Episcopal Church, was quoted as saying, “Most black families exist quietly in Billings. We try to cooperate with whites and other ethnic minorities.”

If Jesse Brooks, that 1910 Great Falls High School senior, could observe what’s happening in America today, he likely again would ask, “Is it jealousy that makes you hate us and persecute us so (given our gains in education and society) or is it because of our black skin?”

And he would likely be equally appalled to have to ask, “Why do we still have to fight against our prejudiced white brothers in this great struggle?”