The “Letters to the Editor” section of a newspaper is a time-honored means of allowing readers to vent on all sorts of political, social and other matters, often contrary to the position the newspaper may have taken.

Recently (given the political climate and protests), it’s become a damned-if-you-do, damned-if-you-don’t challenge for newspaper editors to decide what’s acceptable to print and what’s “over the line.” Example: this letter about slavery printed in The Spartanburg Herald-Journal, which sparked a nationwide discussion.

In Montana’s early days, letters to the editor were often news reports from mining camps and small communities not served by a local paper. The Dillon Tribune, in the 1880s, printed regular correspondence from places like Bozeman.

“Editor Tribune, Gallatin valley never looked more beautiful than at present. Dame Nature again robed herself with her vernal dress, extending in every direction the outlines of one continual picture.” The writer, George Comfort, then proceeded to sum up the state of agriculture, local government, the prospect of the railroad coming to Gallatin county and other matters of business and trade. 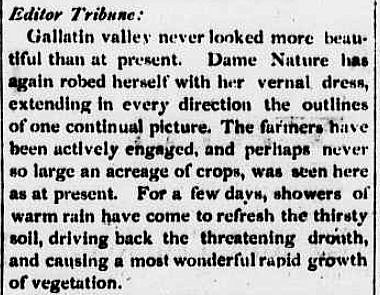 The New North-West, in Deer Lodge, carried a note about changes in mail delivery: “Editor of the New Northwest: I enclosed you a change in the star route service from Avon to Washington Gulch in your county,” signed, Lou Mantle.

Olza Tarbell offered her services as a reporter to the Dillon Tribune, in 1885, writing, “I read in your paper some time ago that you would like to have a correspondent in every mining camp …” Ms. Tarbell lived in Lion City, Montana (now a ghost town a dozen miles west of Melrose, in southwest Montana).

As an example of her writing skills, Tarbell reported on a surprise birthday party given for a local teacher, Mrs. Annie Gladwell: “On the morning of the 22nd day of October, which was her birthday, the ladies who had been preparing for a few days met at mamma’s house with cakes and goodies and marched to the schoolhouse and requested Mrs. Caldwell to give the scholars and herself a holiday.”

She concluded her letter to the editor with, “My mamma and I always enjoy reading your paper, but lately we missed your temperance talks, Respectfully Yours, Olza Tarbell.” She was 9 years old.

Commonly, though, letters to the editor were aimed at perceived wrongs. One written to the Helena Independent in 1890 raised concerns over a contract let by the local school trustees, alleged to be $750 over the lowest bid. “If this is true, there is occasion for a vigorous kick!”

A concerned citizen, signing his letter, “A Friend of the Parents,” wrote to the Missoula Gazette, “Is there a law – state or city – preventing minors from frequenting saloons and houses of the ‘shady character?’ If so, why does our city marshal and his force allow it to continue? Walk Front street any evening…and you will see at least five young gentlemen, between the ages of 10 and 15, regular attendants in the saloons.”

In the summer of 1891, the Gazette reported considerably on the teachers’ convention in Missoula, but included only a small reference to an “interesting and profitable (opening) address” by the “Institute Instructor,” Professor Riley from Butte. 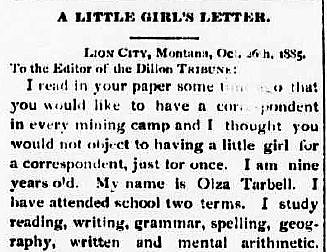 M. MacHale fired off a blistering letter to the editor a few days later labeling Professor Riley’s claim that “no foreigner can ever become a true American,” as “absolutely untrue.” He said, “I declare I never heard in the same number of words coming from any sane, responsible member of society so much trifling trickery, reckless insult and swaddling puerility…”

MacHale concluded, “Suppose Professor Riley was born in a stable, would that make a mule of him? Or in China, would that make him a Chinaman or a foreigner? Men cannot be blamed for the accident of their birth place or nativity.”

In the battle over which city would be Montana’s capital after statehood was achieved, the Anaconda Standard and the Missoulian duked it out through both editorials and letters to the editor.

One man wrote, “To the Editor of the Standard: I support Anaconda from the fact that Marcus Daly has done as much for the advancement of Missoula county as any other man in the county.”

The Missoulian wrote, “If Christ came to Anaconda he would be compelled to eat, sleep, drink and pray with Mr. Marcus Daly.”

Then there was the Cooke City letter, from the Livingston Enterprise in 1890.

Editor Enterprise: I wish to inform you that the boys have started a secret society here called the Damphool Infirmary, its object being to disseminate the principles of loafing and taking matters easy generally. 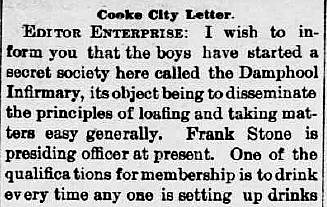 “One of the qualifications for membership is to drink every time any one is setting up drinks for the house. A refusal to do so is sufficient cause for expulsion.

An applicant for membership must also have committed some very apparent act or acts of folly, such as holding on to a wild cat mining claim when a good price was offered them, or staying in Cooke eight or nine years waiting for the boom.” Signed, Mogul.

After many decades as an editor in the craft of journalism, I delightedly lift my glass to “Mogul,” the boys of Cooke City, and their “principles of loafing and taking matters easy.” I am delighted to be retired and sitting this one out.