Thomas Bass, Missoula County Superintendent of Public Instruction, wrote his 1874 letter to parents and guardians in Missoula County (Ravalli County didn’t yet exist), to acknowledge the challenges they were facing and to admit “that some sacrifices will be necessary in order to accomplish” the task of fall school opening.

But he was still upbeat reminding parents, “we must remember that we enjoy no blessing without a sacrifice, and our efforts in this direction will be as bread cast upon the waters, to be gathered many days hence, in the gratification afforded by the knowledge that our children and those dependent upon us are growing up intelligent members of society.”

“The sparse settlements in some of the districts, and the great distance from a common center are serious obstacles to surmount,” he said, “but a little effort on the part of those having children to educate, will be heartily responded to by those who have only an indirect interest.” 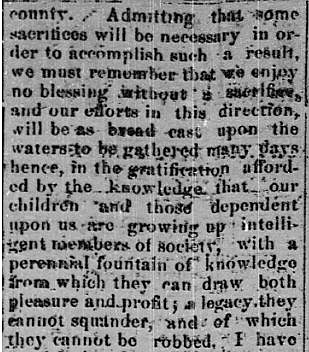 Future challenges would be much different and much more difficult, including pandemics – but, Bass’s advice still holds merit – it will take take all of us putting “our shoulders to the wheel and then call upon Hercules to assist…for the gods help those who help themselves!”

During the Spanish flu pandemic (1917-1918), communities were quarantined and schools were closed for months. Each school district then consulted with health officials and took community feedback when considering reopening.

Ekalaka High School students were back in class by mid-November, 1918.

But in the Bitterroot Valley, Stevensville didn’t see a decline in flu cases until late December, that year. Even then, as officials reopened schools, they did so cautiously, voicing concern over a possible new outbreak. They hoped for “the right cooperation of the pupils.”

But Corvallis schools remained closed longer. Influenza cases, there, were not dropping. Superintendent C. W. Abbott didn’t foresee youngsters returning to school until sometime after the first of the year. That sparked rumors that there would be no classes at all in the 1918-1919 school year, which he emphatically denied.

City, county and state health departments had to make decisions that weren’t always popular –  when is it OK for businesses to open? For schools to reopen? Everyone seemed to have an opinion, with some folks objecting to being told what to do, at all – no matter the health emergency.

Butte exemplified the dilemma, as described in the Sanders County Independent-Ledger on December 12, 1918: “Butte is closed against (the) flu bug (but) it was not closed without spectacular incident.”

When word spread that the Silver Bow County health board had scheduled a meeting at which they might close down the town, a “mob of several hundred” protesters turned out.

“The board members found themselves surrounded by theater employees, labor representatives (and even) preachers” – everyone demanding to know why one kind of business would be forced to close, while another would be allowed to stay open?

And why in the world were the schools being allowed to open?

The Silver Bow County health board listened to it all, then announced it was going to close everything – businesses, schools, churches and saloons, “leaving only grocery and drug stores, restaurants and boarding houses open for public needs.” 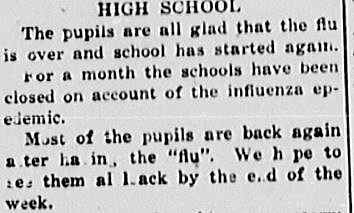 Well, not so fast!

The city’s board of health, flexing its muscle, “refused to recognize the authority of the county board,” declaring that the one-square-mile area making up “the Butte municipality would not be dictated to, and was declared wide open!”

Silver Bow County officials said their order stood and directed the sheriff’s department to enforce the closure; Butte’s “police chief and his forces were out to resist any closing.”

The mess went on for days. The Governor tried to make peace, but was rebuffed.

Finally, Dr. William F. Cogswell of the Montana Board of Public Health stepped in, according to the Sanders County Independent-Ledger.

“Dr. Cogswell, jamming his hat over his ears and taking his suitcase and his courage in both hands, left Helena for Butte to see if he could get the county health authorities and the mayor and the city council and theater managers, the saloon keepers, the preachers, the school board, the cabaret proprietors and the dance hall owners to come to some sort of agreement. He did. Butte shut up, snap.”

In the end, the Butte Post probably had it right a month before that brouhaha.

It admonished its readers on November 18, 1918, “Let every man and woman make it a matter of individual responsibility to exercise reasonable prudence and faithfully observe the suggestions that have come from the doctors as well as from the dictates of common sense.”

As we attempt to head back to school in 2020, we should also acknowledge Thomas Bass’s advice from 1874, “that some sacrifices will be necessary.”