I thought for sure – because of the timing (a little pun, there) –  that Daylight Saving Time would be the “October Surprise” of 2020.

I envisioned some candidates advising us to “ignore it” while others declared, “No, it’s your duty!”

Surely some politicians would warn that our twice-yearly “time change” would disrupt the nation’s transportation system and cause possible bloodshed, even as their opponents proclaimed it the fiscally responsible thing to do – a money saver!

Alas, none of that happened this go-round.

I guess most of us, with notable exceptions like Arizonans and Hawaiians, have become rather used to the idea of Daylight Saving Time (by the way – remember to “fall back” next Sunday, November 1).

But such disharmony did happen when Daylight Saving Time was first adopted around the world between 1916 and 1918. Not only was it not universally applauded – it ended up being short-lived.

It was wartime (World War I) and Germany needed to save money, by saving on the cost of electricity. It became the first country to adopt the time change meant to align the clock (and normal waking/working hours) with available sunlight at that time of year.

Daylight Saving Time (a.k.a. “summer time” or “sun time,” as some referred to it) was adopted soon thereafter by Britain and other countries. The U.S. was a late-comer to the party, finally putting the time change into effect on March 31, 1918. 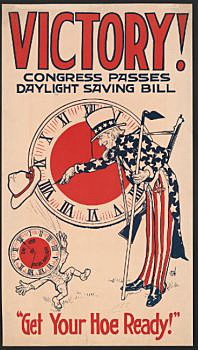 Here in Montana, the Musselshell County newspaper, the Melstone Messenger, reminded its readers that it was their “duty” to set all clocks ahead.

As an aside, to avoid any “grave disaster,” U.S. railroads were actually ordered to halt all trains in place at 2 o’clock a.m., in spring and fall when time clocks changed, and to “remain motionless for an hour and then proceed,” in order to arrive and depart from train stations at the revised time.

Meantime, back in Sanders County, confusion continued between March and early May 1918, when local businesses agreed that adopting the Pacific Daylight Saving Time plan (as had schools and the post office) “would be the most satisfactory.” As the Ledger newspaper put it, “Hence the change – with no bloodshed.”

In Missoula on the night of March 30, 1918, “the gas lights around the University oval were put out at the usual time – 10 o’clock,” according to the Daily Missoulian, “but the electric lights just over the tower clock continued to burn.”

Then, just before 2 am, a janitor climbed up a ladder and waited for the clock to strike 2. One minute later, “three clear bell-like sounds floated out over the quiet of the campus. It announced the university had followed the daylight saving law to the letter.”

Of course not everyone in the world felt it was their “duty” to comply with orders to “spring forward” an hour.

Similarly, across the pond in Indianapolis, there circulated a story of a woman inquiring how late the local cemetery would be open.

The superintendent replied, “It will be open until sundown,” to which the woman responded, “Daylight Saving Time or Standard Time?”

It wasn’t until the Uniform Time Act was passed by Congress in 1966 that Daylight Saving Time became a routine part of our lives: spring forward and fall back.

And yes – as we approach Sunday, November 1, 2020 – we’ll likely all be saying, “Oh boy, just think of it. You will have one hour extra sleep next Sunday morning,” a phrase first coined by the Roundup Record in October 1918.