As a teen in Libby, I remember the fierce high school athletic rivalry between Eureka and Libby in the early 1960s.

The two towns had been rivals in a variety of ways for decades, including the granddaddy of them all – rivals for designation as the county seat.

Originally, Libby and Eureka were part of Flathead County. Then on March 9, 1909, the Montana Legislature approved towns’ petition to separate and form a new county, with Libby named the temporary seat of “Lincoln County,” named after President Abraham Lincoln.

Eureka, though, had its eye on the county seat designation too – and the fight would prove to be a nasty one.

The local newspapers, of course, jumped into the fray, fiercely backing their hometowns. Newspapers across the state began following the story.

The Missoulian newspaper described the competition as “intense” with both sides “fighting valiantly.” The Columbia Falls Columbian newspaper quickly predicted,  “Eureka is bound to win as this is a winning place for everything.” Libby touted its more central location in  the county and claimed to have 100 more registered voters than Eureka. 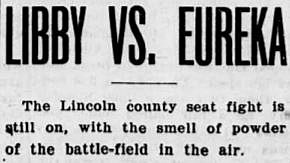 Immediately, Libby residents made “sensational allegations” of voting irregularities. They claimed ballots had been cast by “drunken men.”

They claimed one person voted twice. And, they charged that Libby actually got more votes than officially reported in five Eureka-area precincts.

Libby sought a permanent injunction from the court to prevent the removal of the county seat from its confines, based in part on a contention that the whole election was invalid since no one had ever actually petitioned the county commissioners for a vote on the county seat in the first place.

Both sides met on November 17, 1910 to see if some kind of agreement could be reached to avoid the court battle. But by the end of the month, the best they could come up with was a proposal to cut the newly created county in two. 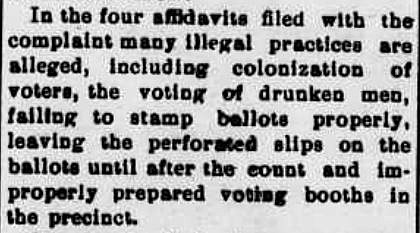 Some say the suggestion was nothing more than a bit of humor, but when one participant was questioned about it, he replied, “I have lock-jaw this morning.”

If all that weren’t enough, a couple of the county commissioners (known to be Eureka supporters) had been working privately since April 1910 to get their hands on the transcripts of county records with the supposed intent of holding them hostage in Eureka. In December, Libby supporters sought a court injunction to “restrain the county commissioners from ordering the records transferred.”

In January 1911, Judge Leslie granted Libby’s request for an injunction preventing the removal of county records, while Eureka’s backers filed a cross-complaint answering Libby’s claims of fraud with a laundry list of their own.

They alleged 35 people were forced to show their unfolded ballots to election judges so everyone could see they’d voted for Libby; that 10 people who were not on the poll books were allowed to vote, and that one ballot was forcibly taken from a voter so it could be cast by an election judge. They asked the court to rule that Eureka was “the lawful county seat.” 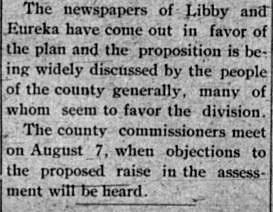 The whole mess eventually found its was to the Montana Supreme Court which, at first, ruled in favor of Eureka, then reversed itself on July 1, 1911, causing consternation not only in Lincoln County but in other counties because of the wording of the majority opinion, written by Associate Justice Holloway.

It declared a section of the “special act” creating Lincoln County, which attempted “to make provision for the permanent location of the county seat, (was) unconstitutional and void.”

Similar special acts were used to create a number of other Montana counties, including Sanders, Flathead and Teton. A.B. Guthrie, the “proprietor” of  the Choteau Acantha newspaper wrote that the Libby/Eureka decision had sparked “considerable discussion in Teton County.”

Still, holding an election to determine the county seat location was still permissible, according to the high court; it just had to be done properly. Specifically, Justice Holloway wrote, “We do not hold that the people of Lincoln County may not by vote determine where the permanent county seat shall be located … (only that) … it must be done under a general law of uniform operation.” 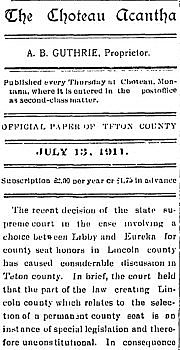 Eureka-backers gave it a final try in September 1911, petitioning for a special election, but Lincoln County’s Board of Commissioners voted two-to-one against it, effectively ending a bitter two-year battle.

Perhaps the events of 1911 in northwest Montana were best summed up at a gathering of the Kalispell Commercial Club, at which a quartet sang an original composition including this:

“Libby has a county seat,

Eureka has one too;

Have boats, but no Choo-choo.”