It’s fascinating how one thing leads to another in historical research.

Today’s story was to be solely about a short-lived Montana newspaper called Wonderland. The name intrigued me.

The search took me from that intriguing newspaper … to the history of Yellowstone National Park and the Northern Pacific Railroad … to the question of who coined the name Wonderland in the first place and why (it turned out to be the editor of another newspaper) … to the discovery of a book written about the subject by a friend of mine (something I’d not previously known).

Wow! Let me take you through the process.

Searching historical databases recently, I found the first issue of a newspaper, called Wonderland, dated May 17, 1902.

The Montana Memory Project digitized Wonderland Publishing Company’s papers from Gardiner (1902-1905), which had been preserved by the Yellowstone National Park Heritage and Research Center. You can read them all, too, by clicking on this link.

That first issue of Wonderland contained wonderful (sorry, puns are a source of delight to me) descriptions of the area’s towns – Cinnabar, Horr, Aldridge, Gardiner, Jardine – and the region’s mining camps. Best of all, there’s a hand-drawn map accompanying the story. 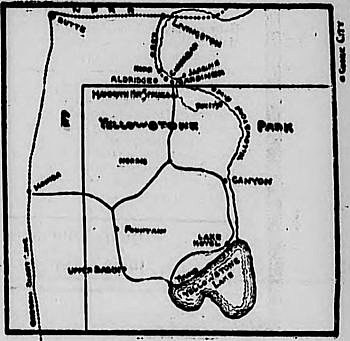 While other railroads had been “selling” Yosemite as the place to go, based on its undeniable beauty and grandeur, the Northern Pacific decided to market Yellowstone as a sort of amusement park for well-do-do Eastern city dwellers. “Wonderland,” after all, was a novelty – it had bubbling mud pits and geysers!

The Northern Pacific Railway’s brochures were colorful and whimsical, a nod to Lewis Carroll’s 1865 fantasy “Alice in Wonderland,” in which a modern-day, fictional English tourist named Alice is shown penning a letter to a friend, extolling Yellowstone Park as “Wonderland.”

In her 1885 letter from Mammoth Hot Springs, Northern Pacific’s Alice writes, “My dearest Edith: When Mr. Carroll wrote that funny book about one of my childish dreams, I little thought the time would ever come when I should sit down to describe scenes and incidents in my actual experience every bit as strange and bewildering.”

The marketing worked. The railroad played a major role in advancing tourism to the park and in helping the community of Gardiner to grow.

But then I began to wonder (sorry, again) if it was the Northern Pacific that came up with the name “Wonderland,” or whether it had been coined earlier? The same question arose over the town’s name – Gardiner.

The Gardiner matter was easiest: No one’s certain. There are a number of versions, most notably the one crediting the name to Johnson Gardiner, an early fur trapper in the region described by some as a “worthless outlaw.”

The first question led to discovery of a months-long series of “Notes on the Way to Wonderland,” published by the editor of the Deer Lodge newspaper, the New North-West, in 1871.

Calvin C. Clawson’s descriptions of Yellowstone were filled with biblical references like “purgatory” and “Hades,” when writing of being near an erupting geyser: “While the frost of the morning is yet in the air, there can be seen, beyond the low mountain to the southeast, the steam ascending from the scape-pipes of purgatory (sometimes called Geysers) to mingle with the clouds.”

Clawson continued, “The earth shook and the hills for a distance trembled as though an earthquake was at work beneath the surface.”

The Clawson newspaper stories then led me to discover a book, entitled “A ride to the Infernal Regions: Yellowstone’s First Tourists.”

The volume contains all 17 of the New North-West articles recounting the “horseback trip he and five companions made in August 1871 to what would become Yellowstone National Park.”

A publicity note said the book’s author was: “Montana history writer Eugene Lee Silliman (who) discovered the original newspaper articles and researched the trip and its members.”

Well, I immediately called Lee – and I’ll be darned – it’s him! 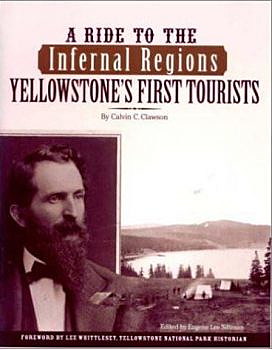 Lee’s a retired teacher and historian. I’ve known him for some time, as we’re both members of the Missoula Senior Forum. I knew he’d published a number of books, but I didn’t know about this one.

Lee put the work together with the assistance of his favorite librarian (and wife), Nancy. They worked from the original copies of the New North-West newspapers in the Deer Lodge library, rather than digital copies I had accessed. Lee tells me the book was one of several anthologies he’d compiled while working and living in Deer Lodge.

The forward to Lee’s book (Riverbend Press, Helena, 2003) was written by Yellowstone historian Lee Whittlesey, who “recommends that readers ‘curl up somewhere in a warm place, pretend it is 1871, and enjoy C.C. Clawson’s fascinating tale of pre-stagecoach Yellowstone.’ “

As I said at the beginning – it’s fascinating how one thing leads to another in historical research.

Who would have thought?