The small family farm that Daniel Kemmis grew up on in the remote plains of eastern Montana offered few adornments. Yet, one decoration in particular has always stuck with him: an oval-shaped frame of a man he knew as “Uncle Walter.”

Kemmis would later gather that this great uncle had served in Montana’s state Legislature for a period of time. In fact, it was this relative’s political career that would help spark Kemmis’ own deep fascination with politics, which began to grow at a very young age.

Aspects of Kemmis’ rural upbringing further contributed to his political interests and played a role in shaping his political philosophy later in life.

On his family farm outside Richey, there was never running water. The farm only got electricity after a group of neighbors worked together through a cooperatives to bring electricity to their rural enclave.

Witnessing people coming together and cooperating to achieve a larger goal would leave a lasting impression on Kemmis.

“I think I came out of that experience with a pretty fundamental appreciation for how much people can get done in the face of great difficulties when they’re willing to put the common good a little bit higher than individual desires and needs,” he said. “And so, that sense of common good, I think, was just kind of bred into me.”

Kemmis’ political interests continued to grow throughout his childhood as he read biographies such as John Kennedy’s Profiles in Courage. Through these readings, Kemmis noticed a common theme emerge: many of the personalities he was reading about had gone to Harvard.

It was this realization that put the idea in Kemmis’ mind that he would also strive to attend Harvard – a goal he would ultimately realize. Kemmis, to this day, remains humble about the improbable odds of a boy from rural Montana ending up at the prestigious university.

“I was lucky in that Harvard had committed itself to some geographic distribution and class diversity,” he said. “And so, a poor boy from a small family farm in Montana, well that will add a little bit to the Harvard salad. So, they took me in. And I was glad that they did.”

His parents could not afford a plane ticket, so he took a long train ride from Montana to the East Coast. During a stop in Chicago, while Kemmis changed trains, his luggage did not. So when he first stepped foot in Harvard Square as an incoming freshman student studying political science in the early 1960s, he carried nothing on his person but a bedroll.

It was, however, not long before Kemmis found his feet in this new environment. He got involved in the counterculture movement and anti-war protests that defined the era – both of which helped to further shape his political ideologies.

“The Vietnam War and the Civil Rights movement were big factors in moving me in a more liberal, if not radical, direction,” Kemmis said.

While still a student at Harvard, Kemmis would also marry a woman from Connecticut and stay in New England to live with her and some of her friends. There, he engaged in a communal living experience.

But memories of Montana started to intrude into Kemmis’ thoughts. He began to have visions of redirecting his life out West again. With his family, he ultimately moved back to Montana and briefly attended graduate school at the University of Montana for philosophy.

Back in his home state, a chance family trip to Helena would ultimately change Kemmis’ trajectory and push him into the political sphere. After visiting the historical museum there with his family, he ventured into the state Capitol building.

“I walked past the Senate chambers and suddenly I remembered Uncle Walter. I remembered all of that childhood fascination with politics, and it all came flooding back,” he said. “And by the time we got back to Missoula, I had decided to run for the Legislature”

Kemmis’ first bid to become part of the legislature was successful. Yet, true to his nature, he remained humble about his early success.

“Luck was on my side because that was 1974, the year of Watergate. The year that Richard Nixon was impeached and eventually resigned. It was the best year ever to be a totally unknown Democrat running against a deeply entrenched Republican,” he said.

After serving at the state level for many years, Kemmis felt the urge to redirect his political energy to a more local level.

“One element that had moved me toward local government was my belief that local level people could work together on solving problems and realizing opportunities in a way that had not seemed as promising at the state level,” he said.

Kemmis ultimately was elected mayor of Missoula in 1989 and was reelected again in 1993.

In his opinion, at the core of what he brought to the mayor’s office was his idea of supporting active citizenship among the residents of Missoula. He also emphasized a brand of cooperation that has become increasingly rare in the political arena today.

“Certainly, I had some ideas. But it was more often the ideas that other people brought and then my willingness to try to bring people together, very often across party lines, to work on things,” he said. 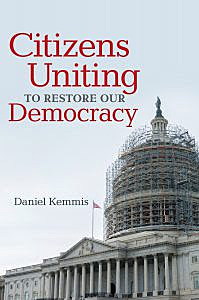 He advocated that people listen to each other and “bring mutual good will to bear” when trying to overcome obstacles.

After retiring, Kemmis focused his attention on writing. Yet, throughout his political career, he published multiple books as well. His most recent book, “Citizens Uniting to Restore Our Democracy,” was published this summer after roughly a decade of work.

Most of the research and writing Kemmis did for the book took place at Break Espresso in downtown Missoula where baristas would compete to make him the driest cappuccino.

Break Espresso provided the perfect venue for Kemmis to work on this book.

“I had friends behind the counter and friends all around me,” he said. “And it was a spot where I could watch Missoula do its thing every morning.”

The 2010 Supreme Court case Citizens United v. Federal Election Commission, which enabled corporations to spend unlimited funds on elections, was the initial inspiration for Kemmis to begin writing the book.

“I thought that was going to change American politics so drastically that, at the very least, I felt that I needed to understand what the court thought it was doing when it made that decision,” he said.

As Kemmis set about trying to understand the court’s decision in more detail, his attention broadened to other political issues inflicting the United States, such as deepening partisan divides.

He was reminded, during this research process, of the positive experiences and successes he had at the local level while serving as mayor.

“I felt the need to understand as much as I could about the possibility of grassroots democracy serving as a kind of healing force within this very wounded and sick body politic,” he said.

The title he chose for the book, Citizens Uniting, is partially a nod to the Citizens United Supreme Court decision. But more importantly for Kemmis, the title is meant to “to invoke that kind of active citizenship that I still believe is where our hope lies.”

Although writing about serious and troubling issues, Kemmis has been able to maintain an optimistic nature.

“I sometimes call myself a ‘congenital optimist.’ I think it’s sort of built into my genes,” he said. “To me, it makes no great sense to get bogged down in what doesn’t work if there’s any possibility of figuring out what might work.”

Kemmis is set to celebrate his 75th birthday this Saturday, December 5. Shakespeare & Co. will be helping him celebrate by hosting a Zoom birthday party with a discussion and reading from his new book.

Among other segments, he intends to read part of the acknowledgments portion of his book during the virtual party.

It is in that section that Kemmis reveals that the book is dedicated to “the devoted citizens of Missoula” who have sustained his “faith in the potential of democratic citizens here and everywhere to do what needs to be done, up to and including healing our badly damaged body politic.”