Within the last couple of months, I’ve come to know my local postal clerks quite well. I’m sure they’re not quite as delighted to see me as I am to see them, given the dozens of books I package and deliver on a daily basis for shipment across the country.

(Yes, Virginia, there is a Santa Claus – and Santa delivered more orders for my new book than an old fuzzy fossil and his wife can keep up with!)

But through this whole process of becoming a first-time author, I’ve gained a real appreciation for the U.S. Postal Service and its employees.

While others talk of profit/loss statements, and question the purpose of the post office, I marvel at what those folks are able to do.

From the beginning of this country, the post office was characterized as essential. George Washington deemed it instrumental “in diffusing a knowledge of the laws and proceedings of the government (and) contributing to the security of the people, (guarding) them against misrepresentation and misconception.”

He was addressing a joint session of Congress, Tuesday, October 25, 1791, as reported by Philip Freneau in the first edition of his National Gazette, in Philadelphia on October 31, 1791.

The only way that speech, and Freneau’s reporting of it, could reach citizens outside Philadelphia was by “the most ready and regular modes of conveyance,” which (without established “post roads” and postal routes) were neither all that ready nor regular.

With manifest destiny’s cross-continental expansion, the need for regular postal service to newcomers in the West remained a high priority for a century. Newly minted Montana territorial communities of the 1860s were desperate to hear anything from “the states” back east, but it wasn’t easy.

“Owing to the Express coach being broken down last night, we are without news,” wrote the Virginia City Montana Post newspaper on August 27, 1864. “We anticipate no mail from the States, or dispatches, as the line has probably been destroyed by the Indians.”

Some of that August mail arrived in November. The Post reported, “Sunday, we received a lot of mail matter, which had made the rounds of the world, for all we know.”

In territorial days, a town wasn’t really a town, until it had a post office – and every town wanted one.

In 1878, Missoula’s post office was designated “a third class office, with a salary of $1,000, and a clerk allowed.” W.H.H. Dickinson, who operated a local store, was appointed postmaster. 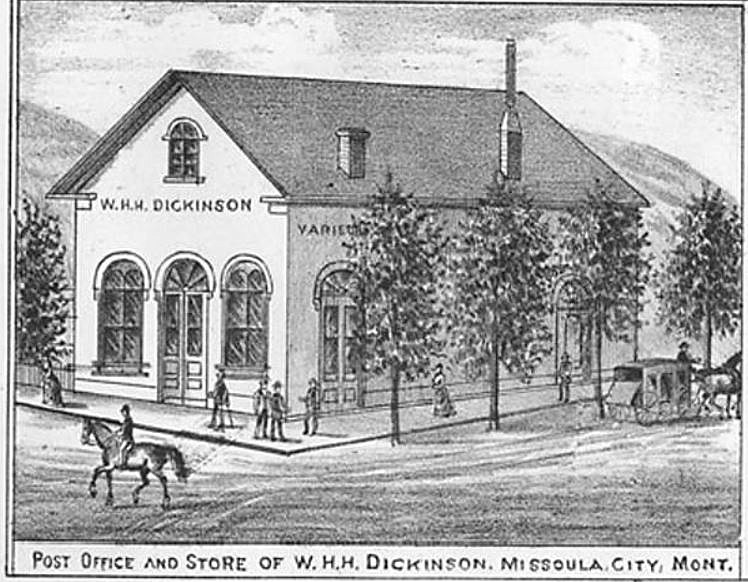 Folks south of Missoula petitioned “for a post office at Lou Lou” (now, Lolo) in 1888. The postmaster was to be John F. Delancy, and the government was to name the office “Lo Lo,” after an earlier moniker for the area.

In my hometown of Libby, the establishment of a post office was cheered in October 1891.

“At last, a post office has been established in the Kootenai country and now people can send letters to that section with some certainty of their reaching their destination,” declared a newspaper story. The new post office was located near Libby Creek where it drains into the Kootenai River.

Early railroads had postal clerks on board their trains to accommodate travelers. But local businessmen near the railroad depot in Missoula saw it as a time-saver and would take their letters straight to the mail cars, bypassing the post office.

In 1894, the postal service banned the practice, saying “it made a large amount of extra work for the mail clerks,” time they needed for “sorting out mail between stations.”

Throughout the 19th and 20th centuries, the postal service carried out that essential work about which George Washington spoke in 1791, plus so much more. Remember ordering from the Sears and Wards catalogs?

Granted, with modern improvements in technology and private entrepreneurial ventures, there are many competitors for package delivery. But for an old codger like me, I can’t envision our country without the USPS.

I look forward to the mail carrier’s visit each day. Perhaps it will be a greeting card or my new driver’s license (yes, I’m still allowed behind the wheel). There’s just something about daily mail delivery – like Linus’ security blanket. I’m not sure I could do without it.

Why not keep a few of the old, comfy things around in 2021 and beyond?