Soldiers from Fort Missoula’s 25th U. S. Infantry marched in a parade and the 25th’s band provided “excellent music.”

At about the same time, a 24-year-old man by the name of Edwin S. Newton, accompanied by his mother, was boarding a train in Medina, Ohio, headed for the Garden City to join Edwin’s dad and brother in search of new opportunities.

Ed was a graduate of Northern Ohio University and a member of the Methodist church.

Over the next 60 years, Ed Newton would make his mark on this western Montana town, though few today probably know his name.

A carpenter by trade, Newton began his career working out of an old wagon shed downtown. He shared office space with another young entrepreneur, Joseph Greenough.

Back then, the town wasn’t much to brag about – described by some as small and underdeveloped – despite the arrival of the railroad a few years earlier.

Encouraged by well-known local architect A. J. Gibson, Newton did well for himself, soon able to expand to a shop located where the town’s original grist mill had been constructed, near the north end of the Higgins Avenue Bridge.

Eventually, he relocated to an office at Pattee and Bank streets, and ultimately built his own two-story brick building at East Front and Clay streets.

Working with local architects like Gibson and several contractors, Newton’s credits as a carpenter would include the Episcopal church, the Lincoln School, the Liberty Theater (later, bowling alley) and a big annex to the Shapard Hotel (destroyed by fire in the 1940s).

In addition Newton won contracts for everything from the city’s new opera house and the county detention hospital at the poor farm to a giant pump house at Fort Missoula.

When Ed Newton retired from private business in 1937, he was quickly appointed Missoula’s first building inspector, taking over

the work previously handled by the fire chief. He held the inspector’s job until his retirement from that position in 1947.

But Newton also had more than his share of heartbreak over the years.

In 1894, Ed’s younger brother, Bonner Newton, headed out on an extended hunting trip up the Rattlesnake Valley, where he had befriended “Coyote Bill” (Briscoe) Beeskove, a controversial character labeled by some, “the sneakin-est man that ever was” (which became the title of my recently-published book containing 46 stories of early Montana history).

When Newton didn’t return to Bill’s cabin one night, the old man claimed to have searched for a while, but when he didn’t find any sign of the teen, he assumed the young man had returned to town. Days later, Edward organized a search party and Newton’s body was quickly found.

The Missoulian gave Coyote Bill Briscoe a journalistic tongue-lashing for his cavalier attitude: “The inconsistency of (his) statements clearly stamps the man as one bereft of ordinary reason. Certainly that is the most charitable construction to place on conduct so unbecoming a human being.”

Well, as you might imagine, that didn’t go over well with the old hermit.

“Mr. ‘Coyote Bill’ Briscoe takes exception to the Missoulian’s reference to his conduct in the matter of the disappearance of his comrade, Bonner Newton, from the Briscoe shack near the Rattlesnake river and has threatened to wipe out the entire staff and all the other beautiful things to be found within the four walls of the Missoulian building,” wrote the paper a few days later. 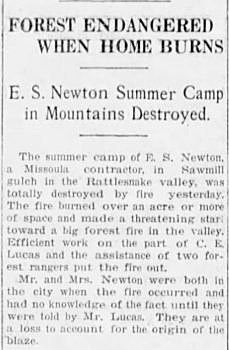 The summer camp he and his wife had built in Sawmill Gulch in the Rattlesnake Valley was destroyed by fire – nearly spreading into the nearby forest before it was checked. The cause was never determined.

Meantime, his wife’s health deteriorated to the point of becoming “despondent and mentally unbalanced.” On Saturday morning, August 11, 1917, she attempted to take her own life, while Mr. Newton had stepped away for an hour to check on business.

When he returned he “found Mrs. Newton lying with a gunshot wound through the left side of her chest,” according to the Missoulian newspaper. She died three days later.

“A great throng of friends and relatives” attended the funeral, at which she was remembered for her gentleness and helpfulness, “before ill health claimed her.”

A year later, Ed Newton married Miss Ina Rockwell. They made their home at 316 Daly Ave. Architect A. J. Gibson and his wife hosted the couple’s wedding dinner. 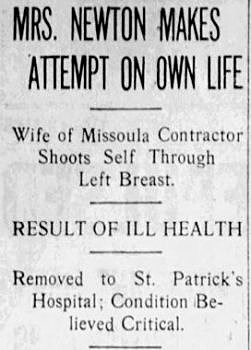 So much has changed in Missoula since Edward S. Newton operated his small carpentry business in the town’s original grist mill on the north bank of the river, just east of the Higgins Bridge.

Even the bridge itself is undergoing a transformation – a major reconstruction and a name change to “Bear Tracks Bridge,” suggested by the Flathead Nation Tribal Council and the Séliš-Ql̓ispé Culture Committee.

As you travel across the new span, give a nod to the past, and a young man from Ohio who made such a difference in Missoula’s history.