In today’s case it was a photo – a photo by Rollin H. McKay dated February 7, 1939. The picture shows a Ford milk-delivery truck, owned by the Bitter Root Parlor Dairy. On its side was written “Grade A Raw Milk, Cooled by Frigidaire.”

The dairy business was doing well in the Bitter Root valley at the beginning of 1939. Press reports told of John Reese constructing a $2,500 barn on his ranch in the burnt Fork area and neighbor Ray Logan building a $1,500 structure.

But, Victor’s Joy Wood bested his neighbors by far with a $5,000 dairy barn, described by a visiting dairy rancher from Arlee as “the best dairy ranch in the state.” Others labeled it “the finest in the U. S.”

Wood’s dairy barn stretched 250 feet long by 40 feet wide, large enough to house the ranch’s 85 registered Jersey cows. It was run by his son Clyde and a number of employees, all of whom had shared-ownership in the place.

The operation included a state-of-the-art automatic feeding system providing the cows with alfalfa hay and automatic watering fountains activated by the cows, themselves.

Sales Manager C W. Buxton told reporters, “Three sterio (sic) bacteria-killing lights…will in 15 seconds kill any bacteria which may be in the air.”

One wall of the milking parlor was made of glass, allowing visitors to watch the entire process. The milking machine used, the “Surge Milker,” was described by distributor Ben Rowe of the Missoula Mercantile as “the most modern milking machine known to the dairy industry.”

The rest of the barn was set up as the bottling plant, with an automatic steam cleaner for all utensils and bottles.

For milk delivery, the owners built a specialized refrigeration truck which would keep the raw milk at a “constant low temperature until it reaches the customer’s doorstep.”

A newspaper ad for Wood’s Bitter Root Parlor Dairy in early 1939 described the delivery truck as “expensive,” but assured readers, “we are sparing no expense in protecting our customers through assuring milk as pure and perfect as it is possible.”

But it was over nearly as quickly as it began.

Opened in mid-February, the “ultra-modern” dairy parlor was totally destroyed by fire a month later.

A nearby neighbor spotted the fire at 2:15 AM, Tuesday, March 27, 1939. He told reporters the entire northern part of the immense barn was already ablaze by that time.

It was suspected that the fire may have started by spontaneous combustion from the huge amount of hay stored inside.

By dawn, all that remained was the blackened smokestack. The fire killed 44 of the Jersey milk cows and more than a dozen new-born calves. The building was valued at at $35,000; the livestock at $10,000.

The structure was never rebuilt, and the Woods were, effectively, out of the dairy business.

By June, 1939 and continuing into the next year, they began to sell off the registered Oregon Jersey heifers, while still marketing the family’s oat hay.

Late in the same year, John Howe, Sr. released the results of his month-long study of the dairy industry in Ravalli county, showing it on the decline, with more dairy cows being shipped out of the county than into the county.

In 1947, Joy and his son, Clyde, filed papers of incorporation for the “Sac-o-Sun” company, which according to the paperwork would “deal in all kinds of feed, including hay and grain, and prepared, processed and mixed feed for livestock, poultry and other animals.”

Nothing more was heard of that venture in the press.

What was, at its peak, a dairy industry with thousands of dairy operations in western Montana, dwindled to about 30 in the late 1980s. By 2012, there were seven and in 2020, according to press reports, the number was down to two.

But, there is a bit of memorabilia left. A token from the Bitter Root Parlor Dairy still exists – for sale, online. One side is stamped, “Bitter Root Milking Parlor / Jersey Cream Line Products.” The other is marked: “Good For ½ Pint Cream.” 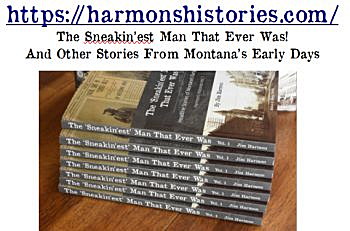