It is Black History Month.

Montana’s African-Americans established a voice in state politics, business and society as early as the late 1800s, with the publication of the Colored Citizen newspaper in 1894.

Other papers would follow in 1900: the New Age in Butte and the Montana Plaindealer in Helena.

The society added, “A number of African-American businessmen had flocked to Helena during the late 1880s and1890s because of its relative racial tolerance and established Afro-American community.”

It concluded, “Ball published the newspaper at 137 N. Main St., the location of his father’s portrait photography business. The paper focused on local and state news with regular columns about fraternal organizations populated by African-Americans.” 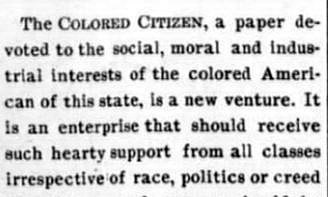 Ball told his readers, “It cannot be denied that our people, through force of circumstance, occupy a peculiar status in this country. We are not thoroughly known. Our better qualities are not presented fairly to the public.”

“Our infirmities and shortcomings are constantly magnified and dwelt upon, while our better attributes remain unpresented.”

“Slowly but surely, their sterling qualities are becoming known, and ere long the ban of prejudice which overhangs them like a pall will be dispelled by the light of favorable public opinions.”

That was part of the reason Ball established the paper –  wanting to create “a mouthpiece – a newspaper wherewith to educate the public to a full appreciation of our worth, that we may be judged impartially.”

But his main reason for the publication was to support the “Helena for Capitol” campaign. Montanans, in the fall of 1894, would vote for either Helena or Anaconda.

He asked Montanans, “Which is more potent and effective: good sound argument backed up with facts and figures and uncontradicted by the Anaconda management, or a lavish use of corporation boodle distributed per capita, where it would do the most good, among people presumably purchasable?”

Of Helena, Ball wrote, “This is a cosmopolitan city. We are all proud of our lovely city with its homes, churches, educational and social institutions. We hope that our people throughout the state without exception will speak a good word for Helena as the permanent capital.”

Voting in favor of Helena, he added, would be considered “a race compliment.” Voting for Anaconda would be a slap in the face to Montana’s African Americans.

“There are certain colored men – some of them are disreputable and unworthy of respect – who are trying to induce colored citizens to vote against Helena. They can set forth no argument therefor, and consequently they harp on the prejudice string. We hope the thinking portion of our people will not be led astray by any such nonsense!”

In a huge display piece, taking up most of the front page of the Colored Citizen on election day, the newspaper blasted Anaconda. 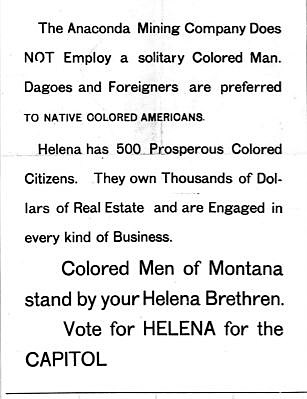 “The Anaconda Mining Company Does NOT Employ a solitary Colored Man. Dagoes and Foreigners are preferred TO NATIVE COLORED AMERICANS.”

“Helena has 500 Prosperous Colored Citizens. They own Thousands of Dollars of Real Estate and are Engaged in every kind of Business. Colored Men of Montana stand by your Helena Brethren. Vote for HELENA for the CAPITOL.”

Helena, of course, won the vote. James Presley Ball, Jr., having accomplished his goal,  made the November 5, 1894 issue of the newspaper its last.

Montana’s other two historical African American newspapers, the New Age (Butte) and the Montana Plaindealer (Helena) were published from May 30, 1902 to February, 1903, and from 1906 to 1911, respectively.