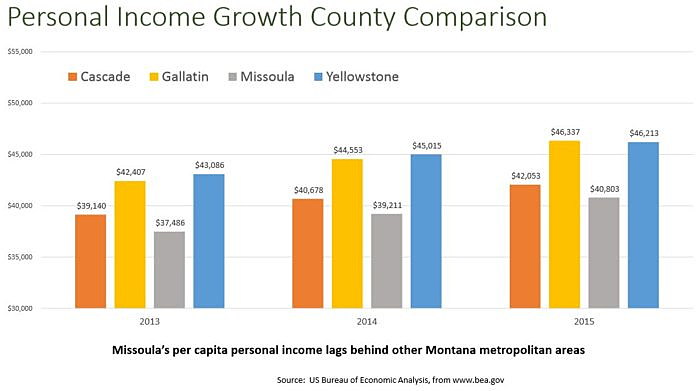 Missoula has seen steady employment growth over the last six years, and while jobs in food service have led the way, higher-wage jobs in health care and other sectors aren’t far behind, the Missoula Economic Partnership said this week.

James Grunke, president and CEO of MEP, said Missoula lost around 3,000 jobs between 2007 and 2010. Since then, however, the city has made up ground, with roughly 61,000 people now in the local labor force.

“Since 2010, we’ve had fairly steady growth in jobs,” Grunke told members of the City Council. “Our current numbers in 2017 are now the most number of people working in this county that have ever worked in this county.”

The bulk of the employment growth has come in the food service industry, which added 913 jobs in Missoula County between 2011 and 2016. That reflects a 20 percent increase, though the jobs pay an average annual wage of just over $15,200 a year.

Yet job growth in other well-paying sectors has also climbed, including health care, which has seen an increase of 27 percent since 2011. That sector added 858 new jobs over that time, paying an annual average wage of nearly $53,000.

“The trend we like to see here is that six of these 10 areas are in industries that exceed the county wage average,” Grunke said. “The service sector is also an important area to learn career skills. It’s not always a negative.”

Despite the uptick in job growth, personal income growth in Missoula County continues to lag. While it rose roughly $1,800 between 2012 and 2015, it remains well behind that of the state, and even further behind the rest of the country.

But Grunke believes the city is making up ground.

“Missoula continues to lag behind the state in personal income growth,” he said. “Where we’re encouraged, though, is we’re seeing that trend change in real income growth.”

In 2014 and 2015, the last year fully measured, Missoula exceeded the state and national average in real income growth, recording gains of 4.6 percent and 4.1 percent, respectively. In 2012, the gains were as high as 5.9 percent.

The increase places Missoula 119th out of 382 metro areas in the U.S. for real income growth, according to the U.S. Bureau of Labor Statistics. And Grunke sees positive signs in other categories as well.

“We actually have a slightly higher labor participation rate than the state and national average,” Grunke said. “We know we need to add a sizable population each year just to meet the current job demand. We’re not going to be able to just recruit these people. Some of it has to come from people who aren’t participating in the labor force.” 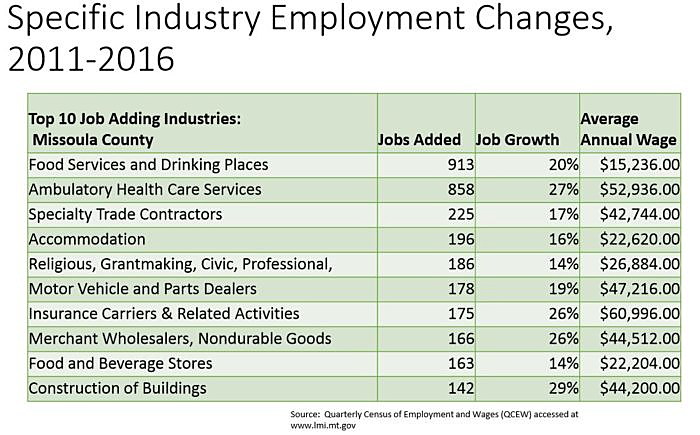 Earlier this year, MEP launched two new studies, one aimed at the local workforce and another on the cost of housing and affordability. The two topics are often joined, since the local median wage of just $41,000 a year places the $253,000 median price of a Missoula home beyond the reach for many buyers.

Grunke said that disconnect may explain why 54 percent of the new jobs created in Missoula have been taken by 46 percent of workers who live outside the city.

“It may point to housing issues,” Grunke said.

Others have their own insight.

“As a real estate agent, I’m seeing a huge influx of people aged 50 to 65 who are early retirees or partially retired,” said Ward 5 council member Annelise Hedahl. “They’re selling their home at the top of the market in a larger market, with a ton of equity and they’re coming here. It’ll be interesting to see what the workforce study shows us.”

The city’s job creation efforts are also showing signs of progress, according to Nicole Rush, who handles the job creation and planning grants for MEP. While the city’s youngest companies represent just 4 percent of the total employment, they’ve added 20 percent of the new jobs since 2011.

“We’ve experienced a lot of interest in these grant programs,” said Rush. “For the next deadline, I’ve had three new companies come forward with potential job creation applications. But state funding for these programs is, unfortunately, a little less than it’s been in prior years. We expect the application process to be a little more competitive in the coming year.”