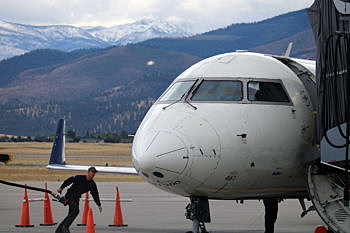 “We just got done with United a month ago to pitch Houston service with them,” said Brian Ellestad, deputy director of Missoula International Airport. “It’s promising, but whether it’s 2018 or 2019, we’ll see.”

In his update to the Missoula County Airport Authority, Ellestad said he and airport director Cris Jensen continue to work to bring new or expanded service to the city, including American Airlines with nonstop service to Dallas/Fort Worth.

Last week, Ellestad said, he traveled to Washington where he also met with officials from Alaska, Southwest and Sun Country airlines about new or expanded service.

“Southwest and Sun Country both go well and at some point down the road, we’ll see what happens,” Ellestad said. “It’s about building relationships and keeping in front of them.”

In late September, a delegation of business and tourism leaders from across Missoula launched a new campaign to grow a pool of revenue to bring more airlines and flight options to the city.

As part of the effort, the Missoula Economic Partnership contracted a local ad agency to spearhead the campaign, which looks to raise around $250,000 a year.

The revenue would help airport officials provide a guarantee as they negotiate with airlines considering service to Missoula. Airlines often require such guarantees when entering new markets to ensure they’re compensated if the flights don’t fill.

Ellestad said the fundraising effort, spearheaded by an employee at at the ad agency Windfall, is going well.

“She’s hit the ground really well and is over halfway to her goal in raising matching money for the (grants),” Ellestad said. “She’s well over $20,000 right now. In that short time, she’s done a great job.”

A kick-off event for the larger fundraising push is scheduled for Nov. 20 at 5:30 p.m. at Neptune Aviation.