The Missoula County Airport Authority on Tuesday approved the schematic design for a new passenger terminal at Missoula International Airport, one that presents modern architecture and is slated to replace the existing building in phases starting late next year.

The board, which approved the design on a unanimous vote, also got its first look at the project’s cost, which will be covered using airport revenue and federal allocations.

“The goal was always to build a terminal that’s usable, functional for the staff, the tenants, the airlines and the customers,” said deputy airport director Brian Ellestad. “Our goal is to design something that, as we grow, we can easily revise, update and add on to.”

Last year, the airport updated its terminal area master plan and contracted A&E Architects to begin planning a future facility. The current terminal, which includes as many as 11 additions, has grown obsolete and inefficient and is unable to accommodate the city’s growing number of passengers.

As presented Tuesday, the new facility includes eight passenger gates spread between two concourses. The first would undergo construction in 2019 after the current terminal’s westernmost section is deconstructed.

“That new concourse would be three-and-a-half times the size of the current hold room in the existing building,” said Chris Martison with A&E Architects. “That alone would get you the capacity you have today but at a much greater level.”

Once the new concourse opens, including ticketing and passenger screening, the airport’s existing concourse would be removed. Its replacement would include four additional gates.

Baggage claim would also be replaced.

“The key always has been to preserve ramp space and build within the footprint of the current building,” Martison said. “We know there’s a lot of built-in safety valves moving forward with how we balance this with the budget.” 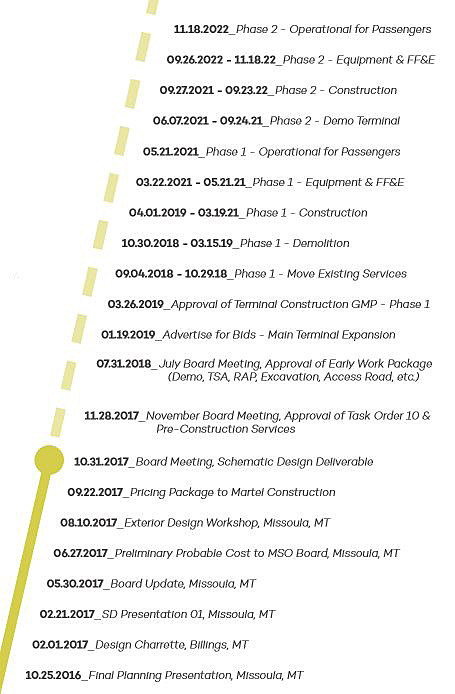 Tony Martel of Martel Construction said the cost of Phase One currently stands between $83 million and $89 million. Phase 2 costs are estimated at $17 million and $21 million, bringing the entire project total to roughly $100 million to $111 million.

How quickly construction advances depends on funding, and part of that is contingent on federal resources and when those resources are released. The buildout could range from five years to 20 years, Martel said.

The first milestone moving forward comes next month when the airport authority will be asked to approve the design phase and pre-construction services. That would be followed in July when bids are let.

“At that point, we’ll have bids on the early phases of the work, and that’s also when we’d move TSA over and start tearing down part of the existing building,” said Martel. “At that point, next July, it’s real but it’s only taking down that part of the building.”

Shaun Shea with Morrison-Maierle said the timing of the project has been carefully crafted to coincide with a number of economic events. Among them, the TSA’s fourth quarter falls in July, which is when the federal agency distributes discretionary funds.

“To have this project out there, bid and shovel ready, we’re eligible to go out and get those discretionary funds,” Shea said.

Martel added that Phase 1 construction should be ready to begin in January 2019, which is also advantageous to the project’s total cost.

“It’s a great opportunity to put a project out to bid and when pricing is most competitive in the market,” he said. “This is the time to go out for pricing on this, and that will dictate how far we go.”

Over the past 20 years, the airport has experienced a 98 percent increase in passenger traffic. While the facility handled 383,000 passengers back in 1996, it served nearly 760,000 passengers last year.

This year, it’s one pace to surpass that figure, setting another record.

“We have it stepped out into a couple different phases so we have these safety valves where we can start and stop the project as we go,” said Shea. “We want to be flexible so that if something happens with the economy or air services, we have a stopping point to protect the airport financially so we don’t extend ourselves too far.”