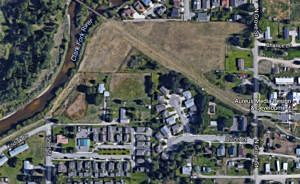 A property owner is asking the city to annex three tracts of land totaling 10 acres, part of which would be dedicated as open space and trail access while the other half is eyed for home construction.

The request was the second so-called townhome exemption presented to the City Council’s Land Use and Planning Committee on Wednesday – a request that marks an uptick in residential building interest along the city’s western fringe.

Kolendich Properties LLC, represented by Territorial Landworks, is asking the city to annex roughly 10.6 acres located near Grove Street and the Clark Fork River. Roughly half the property would be reserved for a 31-unit housing development, though it has not yet been presented.

“The Kolendiches have had this property for going back 100 years,” said Paul Forsting of Territorial Landworks. “They came to us a few years ago wanting to know what they could do with it, because they were ready to develop it. We looked at different designs for the property, but eventually there was some matching interest from the Parks Department in acquiring some land.”

The Kolendich family has agreed to set aside nearly 5 acres of the property as open space. In January, the City Council voted to spend $320,000 from the Open Space Bond to secure that smaller parcel.

Among other things, it offers access to an additional 75 acres of open space known as the Clouse property, located across the Clark Fork River. The patchwork of acquisitions could bring a number of public benefits, according to city open space program manager Elizabeth Erickson.

“It will provide legal and physical access to the Clouse property,” said Erickson. “The Kolendich acquisition along with the Clouse acquisition – if we can provide a crossing over the river – would allow for the extension of the Milwaukee Trail to eventually get to Mullan Road.”

As it stands, the 31-unit housing development is slated for review later this month. The housing project and the family’s donation of open space may go hand in hand, though Erickson said there may be room for negotiation.

“The open space bond acquisition is contingent upon approval of a development the family can work with,” said Erickson. “Combined with this development, it provides the type of package that’s really consistent with our new growth policy, where we have residential development with close access to non-motorized transportation corridors.”