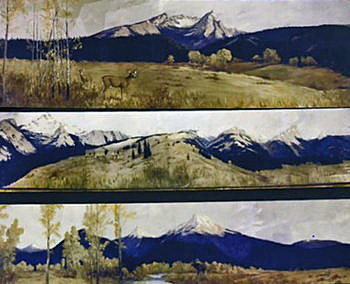 A 63-year-old oil painting said to be the largest of its kind in Montana could get a second life and a new home with funding approved this week by the Missoula Redevelopment Agency.

At a special meeting, the agency’s board of directors freed up $15,120 in tax increment financing to restore the 60-by-90-foot mural, which depicts panoramic views of the Bitterroot Mountains and their grassy foothills as they might have appeared before the arrival of subdivisions and roads.

The funding also covers storage until a new home is found for the iconic landscape.

“Because it’s looking for a home, it seems to me we ought to be able to find one for it,” said Missoula Mayor John Engen. “I’ve had some conversations with Fox Hotel Partners about that. This is a little piece of downtown, and if it were to live on in downtown for a lot longer, I think that would be a good thing.”

Fox Hotel Partners is planning an $80 million hotel and conference center in downtown Missoula and is receptive to displaying the piece of public art once the facility opens. But ribbon cutting could be years away and Engen is looking for the mural’s safe storage until then.

“Dan (Tabish) has secured some space, and that would be part of our agreement as well,” Engen said. “It will be in a place that’s safe and sound.”

Les Peters completed the mural in 1955 and had it displayed in the Bitterroot Room at the Florence Hotel in downtown Missoula, at least until the hotel changed ownership in the mid-1970s.

The mural was most recently displayed at Missoula International Airport, though it was taken down this year ahead of the airport’s construction of a new passenger terminal.

Ellen Buchanan, director of MRA, said Tabish has watched over the mural for several decades and is eager to see it preserved and displayed for public viewing. An appraisal completed by Ray Steele, executive director of the C.M. Russell Museum, placed the mural’s fair market value at $100,000.

“In my opinion, the one-of-a-kind mural represents a unique slice of downtown history, given that it graced Missoula’s premier downtown hotel for many years,” Engen said. “The idea that a new premier hotel downtown would be home to this mural has some poetry to it.”