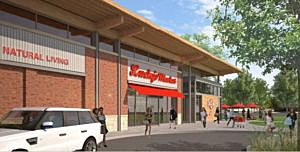 A new grocery store under construction in Midtown Missoula plans to open its doors in early May, marking the second major venue to move into Southgate Mall this year.

Lucky’s Market, a Colorado-based grocer with stores in a number of states, announced its May 2 opening on Tuesday, along with a lineup of events planned the following weekend.

“I’m excited to be a part of the new revitalization of the Southgate Mall, and bring more delicious and local foods to Missoula,” store manager Chad Johnson said in a statement. “Lucky’s Market is not only focused on great food, but also on making a positive impact in our communities.”

According to the company, the local store will offer in-house smoked bacon, house-made sausages, fresh seafood, local produce, a bakery and juice bar.

The store will also feature a selection of “never ever” meats – meats untreated with antibiotics or artificial growth hormones. Organic foods, a cheese island, wine and beer, made-to-order Ramen and grab-and-go sushi will also be featured at the new location.

“Rounding out the new store is a full apothecary department, which has been designed to deliver a unique experience with a bulk DIY wall where people can buy what they need to make their own teas, salves, tinctures, healing elixirs and more,” the company said. “In addition to local soaps, candles and salt lamps, customers will find natural remedies and mainstream medicines for common ailments.”

The new store will occupy roughly 32,000 square feet of the old Sears building, which closed its doors back in 2015. The company plans to hire around 150 people and hold a number of special events around its grand opening, including a bacon-cutting ceremony and a tasting fair.

The company also plans to award $10,000 in grants to Garden City Harvest, Missoula Youth Homes and the Open Aid Alliance. Other events will be announced as the store prepares to open.

Lucky’s Market made public its plans to open its second Montana store last February. It will join the AMC dine-in theater as Southgate Mall’s newest additions.