Sitting around a table at Imagination Brewery last week, Mark McElroy pulled a T-shirt from his bag and spread it on the table.

It is, he said, his current best-seller, given how it depicts Vice President Mike Pence – shirtless – sporting an exotic leather bulldog chest harness, complete with studs.

“When he was governor, he signed a bill saying if you’re a business owner, you can kick out gays and lesbians,” McElroy said. “Well, this is our response to him.”

McElroy and Pete Salinas, along with several other Missoula business partners, launched their left-leaning T-shirt company, SmallHandBrand, in January.

While they’re not the first to make a political statement on a T-shirt, their progressive line of logos has gained a small following at a time when the nation’s divisions have sent many racing to social media – including President Donald Trump himself – to vent their frustrations.

“There’s a lot of people like me in that you just have to laugh or make a point,” McElroy said. “You can only laugh or get mad, and I love satire.”

While SmallHandBrand has dedicated two logos to Pence – the other places the vice president at the Bates Motel in the role of Norman Bates – other members of the Trump administration haven’t escaped the attention of the company and its Missoula artists.

There’s Trump and Russian President Vladimir Putin holding hands, and a nude Trump covered only by a red button that reads “push.” It’s a “Big Button,” of course, playing off the president’s warning to North Korea that his button is bigger than theirs.

“Whether you happen to be a Republican or Democrat, I don’t care,” said McElroy. “But Trump’s approach just left us all a little bit raw and how he’ll just say anything. It’s a good time to raise awareness.” 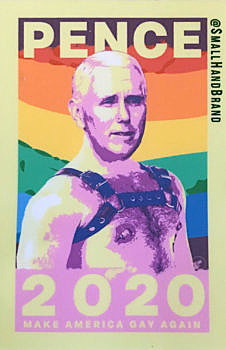 Like any group of friends who get to drinking beer, the ideas and the tongues often fly, though the jokes typically are left at the bar. SmallHandBrand found its start in similar fashion, though the group of friends moved beyond the bar, turning those punch lines and political statements into a business.

After going live with SmallHandsBrand, the business drew its first target. It came in the image of Donald Trump Jr., who they dubbed Fredo and placed in a Godfather movie logo, circa 1972.

And if you’re wondering, the company’s name was derived from a spat between Trump and Sen. Marco Rubio, the later joking that Trump’s hands were the size of someone who is 5-foot-2, not 6-foot-2.

“And you know what they say about men with small hands,” Rubio quipped during that exchange in 2016.

“We all get along so well, it’s fun to sit around and drink and come up with these crazy ideas,” said Salinas. “We wanted to use political satire to make fun of Trump, so off we went, trying to come up with different subjects. There’s no shortage of material out there.”

Salinas may be more moderate than his left-leaning business partners, though he still enjoys the work. A salesman by trade, Salinas – along with his partners – is still learning the business, and still looking for novel ways to sell novelty products.

“Selling T-shirts online has proven to be a little more difficult than selling software, only because we’re having to learn that side of the business,” said Salinas. “We’re really trying to put things out there that can create a little bit of a movement. Even if it’s a little movement, it’s still a movement.”

The partners behind SmallHandBrand might get a laugh from the Trump Administration and its atypical style of politics, but they’re also looking to make a statement and raise awareness around issues close to their political heart.

Other products in their inventory include the defense of LGBTQ community, and empowering women. Salinas is the father of three daughters, and they’ve been brought into the fold given their prowess on social media.

“I’ve got three daughters at home and I want them to learn that their voice needs to be heard,” said Salinas. “They can also get around social media a heck of a lot better than us old guys, especially me. It’s cool to see they have some kind of an interest in a startup business. They’re wanting to get into something with a little more hustle and bustle.”