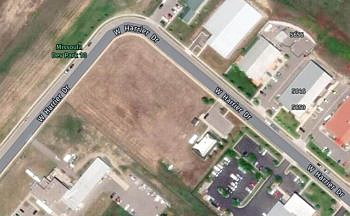 Missoula County commissioners this week made a counteroffer on a small piece of property located in the airport industrial park, hoping to capture what they see as a fair asking price.

The half-acre property, located off West Harrier Drive in the Missoula Industrial Park, has been on the market for years and represents the last industrial lot in the development.

Palazzo Properties LLC, owned by Adam Hertz, has offered the county $50,000 for the parcel. The county countered at $75,000 based upon the recommendations of the Missoula Development Authority.

The price reflects a cost of $4.64 a square foot – the same price that two adjacent lots fetched when they sold in December. However, a third of the lot is deemed unbuildable.

“We thought that (price) was roughly still fair,” said Commissioner Josh Slotnick. “If we subtracted out the unbuildable part and multiply the remaining square feet by $4.64, we get at the $75,000. This may just be our first offer, and if Mr. Hertz is really serious, there will be some back and forth. There’s a pretty big gap between $50,000 and $75,000.”

The property represents one of the smaller lots in the industrial subdivision and is challenged in part by its topography. A portion of the lot slopes steeply to the south, and the local clay soils can make drainage challenging.

“The slope is clearly an impediment to building on that lot,” said Dori Brownlow, director of the county development district. “I have no idea if that $75,000 offer will be accepted or not.”

Early last year, the county received a single offer on three lots of $3.55 per square foot, including the lot now in question. Commissioners countered at $4, though that was rejected. In past years, the listing price has been as high as $6 per square foot, Brownlow said.

“I have not had anyone interested at $6 a square foot,” she said. “I think $6 for the nature of these lots is really high. This is the first offer I’ve had other than early last year.”

Most of the county’s development park was annexed into the city last year and continues to see robust activity. A small office is under construction off Harrier Drive and Coca-Cola Bottling Co. High Country of Missoula broke ground on a new distribution center off Expressway Boulevard this spring.

That larger parcel will be further subdivided.