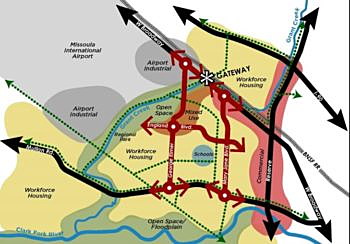 Missoula County and its partners will receive roughly $13 million to launch the first phase of a major infrastructure project west of Reserve Street, Sens. Steve Daines and Jon Tester announced on Wednesday.

Daines said the funding will kickstart the project, which looks to lay the groundwork for current and future development between Mullan Road and West Broadway.

“This funding is a big first step for the Missoula BUILD grant project and the community,” Daines said in a statement issued with Wednesday morning’s announcement. “This project is important for infrastructure in Missoula as it helps in continuing to develop the city, as well as with construction of the new Missoula veterans” medical clinic.

After falling short of the grant last year, the county reapplied for the BUILD grant again this year. It received wide support from the city and other partners, including area developers, nonprofits and the Missoula Chamber of Commerce.

Chamber CEO Kim Latrielle credited the grants success in part due to community agreement and teamwork. She joined city and county officials Wednesday in discussing the impacts of the grant.

The grant also had the backing of Sens. Daines and Tester. Both senators met last month with U.S. Transportation Secretary Elaine Chao, urging her to support the project.

“This grant is big news for anyone who lives, works or does businesses in and around Missoula, and I’m glad the federal government agrees,” said Tester. “It’s a much-needed project that will help make housing more affordable, and improve roads and other infrastructure critical to keep Missoula thriving.”

County officials have said the grant will help fund nearly three miles of new roads and open access to nearly 1,500 acres of developable land. It could also lead to the placement of nearly 3,000 residential homes and 7,000 new jobs.

And while the county initially applied for $23 million, a spokesperson for Daines said future funding could be made available.

“This is a huge step forward. From there, they’ll continue working with Sen. Daines so they can get the full support,” said Julia Doyle. “Any additional funds they need they’re work with the senator to find ways to do that.”