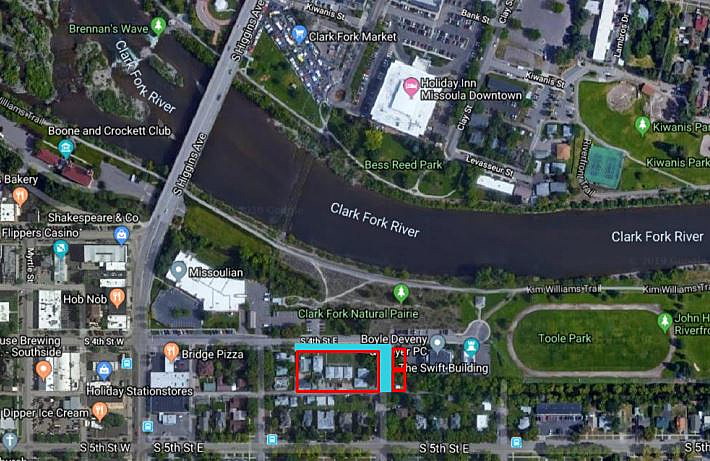 City policies adopted over the past two years encourage the development of high-density housing in and around downtown Missoula, and a condominium project proposed for a dead-end street within the district fits the bill.

But the project and its 48 housing units has drawn opposition from some University District residents who feel they’re protected from redevelopment under current city ordinances and fear the project will alter the character of their neighborhood.

The City Council will consider the project next Monday night, and members spent much of Wednesday gleaning aspects of the proposal ahead of the public hearing.

Papaw LLC and Cade LLC are asking the city to vacate 22 feet of right of way along South Fourth Street East and rezone the parcel to accommodate the project, which includes an element of affordable housing.

Both the planning board and city staff have recommended the project for approval, saying it aligns with city policies and goals. Representatives of the developer asked the city Wednesday to consider those plans, including its new housing policy and downtown master plan.

“This project can be described as increasing opportunities for home choice, both in ownership and rental opportunities,” said Nick Kaufmann with WGM Group. “As this area transitions, there’s an opportunity to transition along South Fourth Street East as well.”

The city has placed a number of conditions upon the developers, including saving native grass for replanting elsewhere, and to make public improvements in the right of way if a vacation were granted.

The conditions also require the developers to secure a contract to relocate several historic structures to a separate location. If no one is interested in relocating the structures, the developer will be asked to deconstruct the buildings and salvage any historic features for future use.

While the project is privately funded, the city will also require the developer to include an element of affordable housing. That could either include housing vouchers or reserving at least 10% percent of the units as affordable housing.

Montana James with the city’s Office of Housing and Community Development said that would represent a gain in affordable housing, as the homes currently on the property lease for market rate.

“What we’d be gaining is either four affordable home ownership options in this neighborhood right now that don’t currently exist, or units that are available to voucher holders in a neighborhood that has just two vouchers placed in it,” said James.

Housing advocates see that as a plus, though area residents oppose the project. Some have lived in the district for years and say housing costs could soon force them to move elsewhere.

“If the infill projects that you are planning continue, I’ll be an old lady shuffling in from somewhere else to get to the services I like here,” said University District resident Annie Garde. “The high-end condos planned are to me not to the character of the neighborhood I’ve been living in for 50 years.”

Some residents described the project as a “sell out” to the University District. It remains the only district in Missoula to win protection from certain types of redevelopment under rules adopted on a 6-4 vote by the City Council last year.

But many outside the University District have criticized the neighborhood’s unique protections as a sign of inequity and favoritism. Projects similar to the condominium proposal have landed in nearly all other neighborhoods across the city.

Still, those who live there blasted the proposal.

“I’ve seen the development of this area,” said John Patterson, who owns several properties in the area. “This project is an affront to those of us who live in this area.”

Some also fear the project, which hasn’t been designed, won’t fit the neighborhood character. As planned, it would stand four stories at its tallest point and taper down to blend with surrounding buildings.

The area is already home to a mix of residential and commercial properties, including several office buildings and a number of multi-story apartments. Kent Means, the lead architect on the project, said the neighborhood’s existing character would influence the final design.

“We’re totally open to meeting with the historic preservation officer as part of the process and have already been doing that,” said Means. “We’re thinking of using materials we believe are consistent with the area. We imagine brick, and window shapes and sizes similar to other buildings in the area.”

The city’s new downtown master plan looks to bring more housing to the district across a range of incomes. The property lies in what’s been designated as the urban center, which advises high-density residential development.

The property also sits near non-motorized routes, including the Kim Williams trail, and it lies within walking distance to the Hip Strip and downtown Missoula and their array of services.

“When we can put people and homes adjacent to those public improvements, we get a better return on our investment,” Kaufman said of the public benefit. “It’s why higher density is encouraged here, both through the housing policy and growth policy.”

Residents near the condominium project have met the petition threshold which, under state law, will require two-thirds of those City Council members who are present and voting to approve the project.