The city of Missoula will fund a study exploring ways to consolidate facilities used by Public Works that could include building a single, central site through a partnership with other entities.

Doing so could save money down the road by reducing duplication, and it could also free up key properties owned by the city for other uses, including housing.

Jeremy Keene, director of Public Works, said an industrial site off Scott Street along the railroad tracks has emerged as a leading candidate for a consolidated site shared by several entities.

“We want to take a hard look at the Scott Street site, and also talk with some adjacent landowners and users, along with some other potential partners, in creating a public works facility,” Keene told members of the City Council last week.

Potential partners in a new facility could include Mountain Line, which is also looking for a new location, and the Montana Department of Transportation. Other stakeholders will be identified as the plan moves forward, Keene said.

“The big questions I have is how much space do we need, and who are our potential partners where it makes sense to go together on a facility,” he said. “This study will answer those questions, and from there, we’ll have additional steps.”

The move would see a number of like-minded utilities locate to a single site, including Missoula Water, along with stormwater and the Street Maintenance Division. All three entities will split half of the study’s $57,000 cost while the Missoula Redevelopment Agency funds the other half.

While co-locating with other divisions and organizations could save costs, it may also free up prized properties for other uses. That includes Missoula Water, located on a large underused parcel on West Broadway.

“At the water building, we have half a block used as a parking lot and equipment storage, and an old office building that doesn’t work very well anymore,” Keene said. “Looking at this holistically will give us a chance to see how we can use that property differently.” 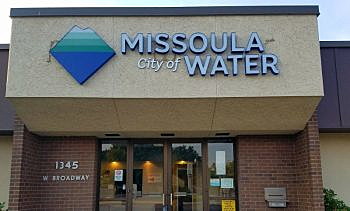 That possibility could be years away, though it perked the interest of City Council members, who envision other uses for the city’s Broadway property.

“I think this is an exciting process and there will be some inherent efficiencies in co-locating services,” said council member Jordan Hess. “Locating rolling stock and staff and all the Public Works resources close together will be an inherently good thing, and will potentially free up some interesting opportunities at our existing other sites.”

As council member Heidi West noted, the Broadway property “is in a great location for housing.” The study will help determine future scenarios, and how individual properties would be sold or used if a centralized Public Works facility were built off Scott Street.

The Scott Street location is already in an industrial zone and is part of a larger urban renewal district.

“If the water utility is given other land in another place, maybe there’s a trade there,” said Keene. “If that’s the direction it goes, we’ll have to cross that bridge and figure out how we utilize that Broadway property differently.”