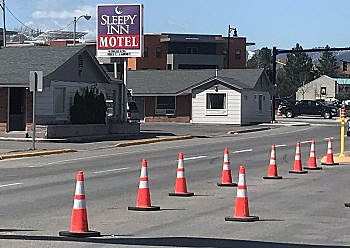 Questions over what the federal government will reimburse for a non-congregant shelter purchased by the city for $1.1 million and for how long remained murky on Monday, leading members of the City Council to seek clarification on operating costs.

Most of their concerns were assuaged by local health officials, prompting the council to approve a memorandum with Missoula County regarding the shelter’s immediate use and occupancy during the COVID-19 pandemic on a 9-3 vote.

“We did close on the facility this afternoon and we have the keys,” Missoula Mayor John Engen told the council, saying the Sleepy Inn had been assessed for remediation needs ahead of occupancy. “That work can begin in earnest this week, anticipating that rooms would be available for use, we hope, by the end of this week or early next week.”

Health officials over the past two weeks have said FEMA will reimburse 75% of the costs of operating the shelter for pandemic use, and the state will pick up the remaining 25%, leaving the county paying nothing.

But the current agreement with FEMA is on a 14-day basis, and renewal will depend on local circumstances. The current agreement expires on May 10 and must be reapproved for another 14 days by the federal government. No new cases of COVID-19 have been reported in Missoula County in nearly a week.

The county will vote on the memorandum guiding the shelter’s use on Tuesday. City officials placed the daily cost of the lease at $1,666 a day. Total monthly expenses are estimated at around $100,000, though that will be determined by occupancy.

“We continue to need the alternate shelter,” said Health Officer Ellen Leahy, who issued a directive on Friday stating that the city will remain closed to business beyond Gov. Steve Bullock’s statewide order. “We continue to have folks that we are looking for non-congregant shelter for.”

Leahy said the facility would be cleaned and sanitized and equipped with new mattresses. She said the hotel would be used on a 14-day basis – the length of a quarantine – though she couldn’t give a timeline for when it would no longer be needed for its intended purpose.

Each new case of COVID-19 would start the clock over, she said, saying the virus’ seasonality remains unknown.

Leahy said it would be important to make sure the virus wasn’t in a seasonal decline.

“We’d see how it looks in the fall, for example. As long as the virus is present in the community, we do need to have beds available,” she said. “Even if it’s sitting empty for a few days or longer, the beds need to be available as soon as a person has been identified for testing and has been tested.”

Most members of the council viewed the federal reimbursement as a significant offset to the city’s $1.1 million purchase price for the hotel. As long as the shelter is used and approved by FEMA, the federal government will essentially pay down the city’s cost of purchase.

City and county officials have said 100% of the shelter’ operating costs will be reimbursed.

Three city council members disagreed with the purchase, saying the biweekly agreement with FEMA regarding reimbursement left local government vulnerable, and there was no guarantee FEMA would renew its contract. It’s also unknown whether FEMA would pay for asymptomatic individuals housed at the shelter.

“We have sought use of the entire facility so that it allows us to address and plan for the unknown future of how many folks we may have sheltered at any give time, so having the entire facility up for our use is extremely beneficial for that and is reimbursable under FEMA guidelines,” said Adrian Beck, head of the county’s Disaster and Emergency Services.

Critics also questioned the true costs of opening the hotel as a shelter and what FEMA will and won’t pay. Advocates said voting no on the agreement declined members of the public a chance for safe quarantine at the government’s expense.

No major issues were observed during inspection, and anything that did arise would be paid for on a “case-by-case” basis. Engen placed the cost of anticipated repairs at less than $100,000 and said general fund dollars would cover the costs with hopes for federal reimbursement.

The city purchased the property free and clear and owes no debt. Any reimbursement from the feds would go back to Urban Renewal District 2, which funded the purchase through tax increment financing, Engen said.

The $49 nightly fee is based on what Beck described as current GSA rates.

“We had to take some of the operational costs we factored in and subtract those from what would be a normal room rate at a local hotel,” said Beck. “Coming to a $49 per unit per night was really just a way to quantify what we’d pay for that facility use. We’re not necessarily tying that lease payment to the number of people we have in there, because our intention is to have control over the entire facility.”